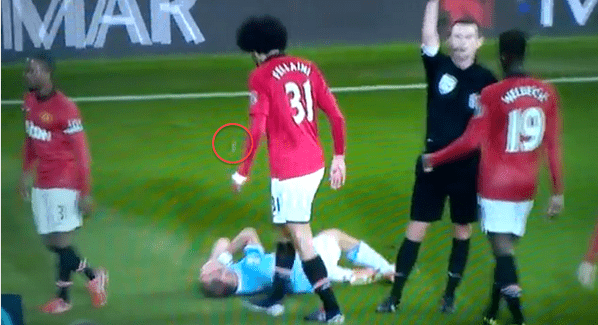 Manchester United midfielder Maraoune Fellaini could be in real trouble with the FA, with video footage appearing to show the Belgian spitting at a prone Pablo Zabaleta.

During Manchester United’s 3-0 defeat at the hands of Manchester City, Fellaini seemed to plant a nasty elbow in the face of the City defender.

With the Belgian escaping a red card, images have now appeared showing Fellaini seemingly spitting in the direction of Zabaleta, who was on the ground in pain after the initial incident.

If it is found as strong enough evidence, the afro-haired midfielder could face a ban. What do you think? Is he guilty?