PHOTO: Emre Can in Liverpool shirt

Liverpool have announced the £10m signing of Emre Can from Bayer Leverkusen. The German becomes the Reds’ third signing of the summer after having already acquired the services of Adam Lallana and Rickie Lambert both from Southampton. 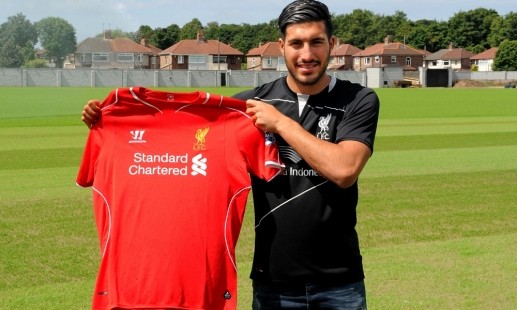 The Reds had earlier agreed personal terms with the player and the necessary documentation has now been completed which paved the way to make the transfer official.

Can claimed that he was delighted with the switch to the Anfield outfit. “I am proud to be a part of the family and I am looking forward to playing here. I will give it my best.”

“Liverpool is a great club and the fans are amongst the best in the world. I am looking forward to the first game and can’t wait to step on the pitch for the first time at Anfield.”

The 20 year who plays a a central defensive midfielder and also being able to draft in as a defender featured in 29 Bundesliga games last season scoring three goals in addition to seven Champions League appearances for the Bay Arena club.