Liverpool captain Steven Gerrard has written a heartfelt Instagram message to the departing Luis Suarez, thanking the Uruguayan for his contribution to the club, insisting that it had been a pleasure playing with him, and wishing him all the best in the future. 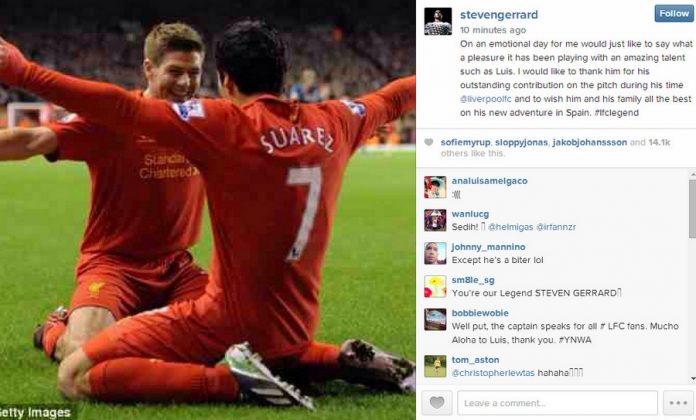 Liverpool confirmed that Suarez, who is currently serving a four-month footballing ban for biting Giorgio Chiellini in the 2014 World Cup, will be joining Spanish side Barcelona this summer for £75m, with the majority of Premier League fans mourning the loss of yet another outstanding player from the English top flight, despite his past (and present) misdemeanors.

Gerrard, 34, previously said that Suarez was the very best player he had played with in his career, and his will be a big loss especially for Liverpool, who will be desperate to build upon their successes of last season, coming a close second to Manchester City and qualifying for the Champions League for the first time since 2009.

See the below video of Gerrard explaining just how highly he rates Luis Suarez right after the departing striker picked up the 2013-14 PFA Player of the Year award:

What do you think? How much will Liverpool miss Suarez?