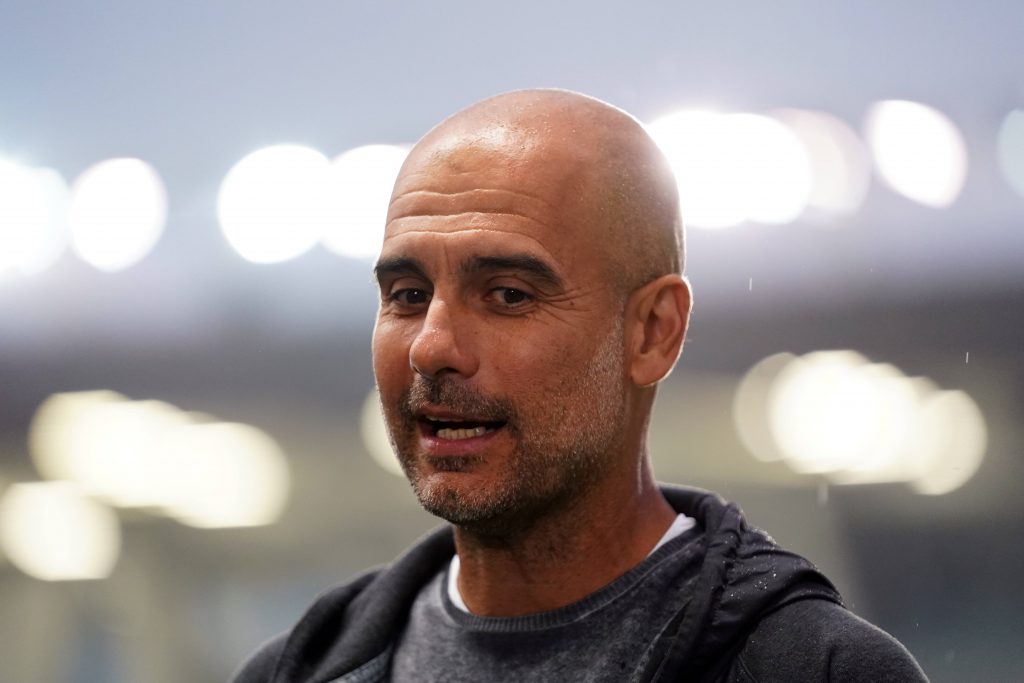 Manchester City boss Pep Guardiola was quizzed about the club’s chances of signing Lionel Messi and Harry Kane ahead of the Community Shield clash against Leicester City tomorrow.

The Cityzens secured the signing of Jack Grealish from Aston Villa for a British-record £100 million fee last night.

However, the main focus was on Messi after Barcelona confirmed the decision to part company with the Argentinian forward.

The Premier League champions are among the favourites to sign Messi on a free transfer.

When asked about the possibility, Guardiola said that the Argentine is not in the club’s thoughts after the surprise announcement.

“He will wear the No 10 because we were incredibly convinced with Grealish, and we were convinced too that Leo would continue at Barcelona, so right now he is not in our thoughts. Absolutely not.”

Meanwhile, when quizzed about the club’s interest in Kane. Guardiola acknowledged that there is interest, but it is up to Tottenham Hotspur to decide whether they would like to sanction the striker’s exit.

He added: “He’s a player for Tottenham Hotspur. If Tottenham don’t want to negotiate, it’s finished.

If they are open to negotiate, I think not just Man City but many clubs in the world want to sign him – we are not an exception – but it depends on Tottenham.”

The arrival of Grealish could pave the way for a potential exit from the club’s ranks this summer.

Bernardo Silva has been one of those linked with a move elsewhere. Guardiola accepted that there are more players alongside the Portuguese that want to leave.

“He’s our player,” he said. “Not just Bernardo, there are two, three or four players that want to leave.#

“But they are our players under contract. When they bring some offer and their agents come here and they want to leave, we are open to discuss absolutely everything, but it depends on them.”

City are eyeing a world-class striker this summer, and they have been heavily linked with Kane over the past couple of months.

Spurs have set a staggering price of around £160m. The Cityzens are clear that they are unlikely to meet the valuation for the England international.

Amidst this, they have been handed a surprise opportunity to sign Messi. It has been reported that the City Football Group have already made an approach.

The six-time Ballon d’Or winner has been offered a three-year deal to spend two seasons with City and a third in MLS with New York City FC.

Bernardo was in-and-out of Guardiola’s plans in the Premier League last term, and a move elsewhere could be ideal for him in the prime of his career.

The Portuguese’s exit would free up wages and funds for the Cityzens to land Messi. The 34-year-old would likely command a Premier League-record salary.

Read: Carlo Ancelotti aims to build his Real Madrid side around Vinicius Junior.