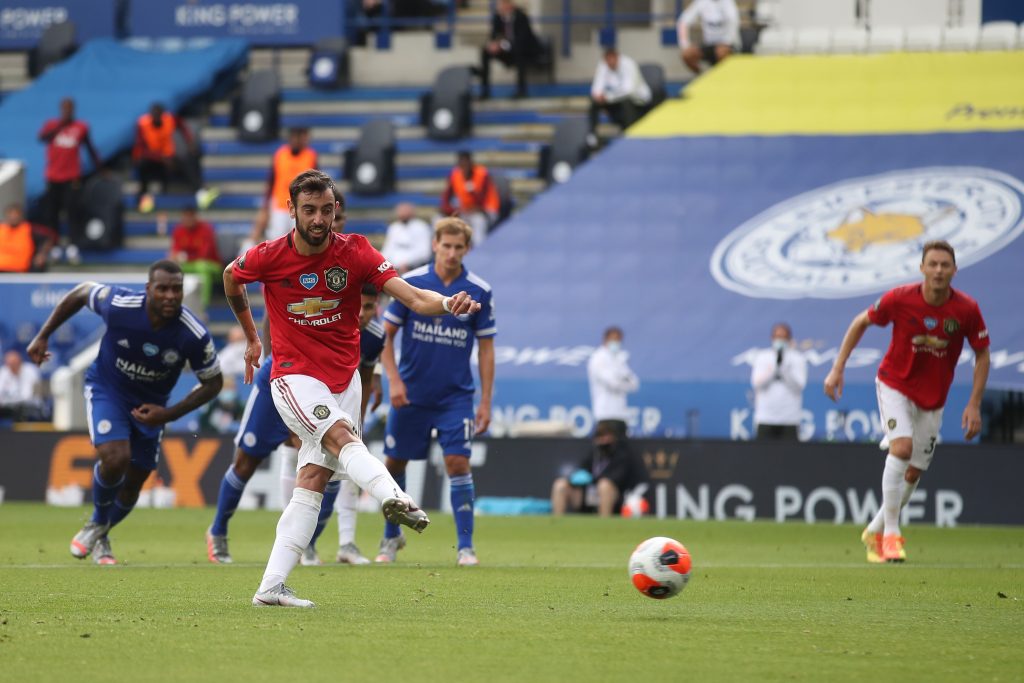 The art of penalty-taking is certainly not as easy as most people make it out to be. The fact that the xG assigned to a spot-kick is only 0.76 clearly indicates that the taker has a lot to do if they are to convert their big chance from 12 yards out.

While most penalties are centred around mind-games between the shooter and goalkeeper where they both try to pre-empt the other’s move, two players have been changing this.

They are Jorginho and Bruno Fernandes, who have extremely unconventional penalty-taking techniques, which involve a jump just before the ball is kicked.

Jorginho was the inventor of this technique, and we analysed his penalties in the first part of this series, which you should read before getting stuck into this piece.

Fernandes’ introduction to top-flight penalty-taking came in 2016, but he too did nothing extraordinary apart from taking a couple of relatively long steps. His first steps into the realm of the jump came in April 2018, a few months after Jorginho had created it.

Fernandes’ first jump-style penalty was a variation of Jorginho’s technique. Here is what he did:

Like Jorginho, the Sporting man started at the edge of the penalty area, but he did not really jump. Instead, he just took a seemingly-unreasonably long step, which gave him time to look up and look at the goalkeeper for any hints regarding his movement.

He had about half the time, though, as he was never fully airborne, and his foot only went half as high as Jorginho’s usually does (the blue dotted line).

In this case, the keeper did a decent job of controlling his centre of gravity, but the angle of his right foot gave away his plans to dive to his left, so Fernandes sent his penalty in the other direction.

Fernandes hadn’t even planted his standing foot when the keeper sold himself.

However, there were a few downsides to this jump-less technique.

If the keeper remained perfectly coy (as he does here with an unmoved centre of gravity and feet position), Fernandes would have to pick his spot himself. However, the lack of jump and resultant slow movement made that he could neither generate enough power nor guide it to either corner.

Therefore, if the keeper was waiting to see Fernandes’ move and react accordingly, he had a simple save to make, as he did here.

Fernandes changed his penalty technique thereafter, as he fully adopted the way of the Bruno bounce.

He started properly jumping now, as you can see above, and just like Jorginho, he took a look at the keeper mid-air, who was having an absolute clearance sale here. His centre of gravity and feet were essentially a huge signboard telling Bruno to shoot to his right, and there was no missing.

Here too, the keeper was not prepared to give anything away, so Fernandes had to take the decision himself.

With the power of the bounce, Fernandes could get better height, power and direction on his penalty. The goalkeeper guessed wrong anyway, but it would not have mattered in either case as the spot-kick was on course to take out the camera nestled in the corner of the net, meaning that there was no chance for the keeper.

Crucially, Fernandes began mixing things up immediately after he had perfected the jump, giving him a key advantage over keepers.

PSV’s Jeroen Zoet might have done all the research he possibly could have, but there was no way he was expecting what he got. After placing the ball, Fernandes only took a couple of short steps instead of going all the way back to the edge of the box.

This shortened run-up disabled any chances of jumping, so Fernandes just smashed it into the top corner.

Back to the bounce.

Lars Unnerstall was the next PSV keeper who was subject to a Bruno Fernandes experiment.

The keeper was certainly expecting Fernandes to lace one into the top corner again, so he made his move early. However, this was just a decoy from the Portuguese international. Fernandes could not jump due to his run-up, but he could slow down and take a look at the keeper (as he did in his original technique).

He did not need any power or precision in this case; all he had to do was slot the ball in the opposite direction to the keeper’s dive.

The keeper wasn’t even trying at this point.

The keeper tried to be smart by feinting to go one way and then diving in the other direction, but he wasn’t smart enough.

Now for Fernandes’ first penalty (of many to come) in the Red of Manchester United.

Ben Foster did not offer any real resistance, as he showed his cards very early, enabling Fernandes to guide his shot home with ease.

Fernandes kept innovating even after changing clubs, and his newest variation was tested on Hugo Lloris first.

At this point, Lloris was probably expecting a routine jump penalty given the length of the run-up.

He was in for a surprise, though, as Fernandes did not slow down at any point in his run-up, keeping his head down and focusing on the ball throughout.

Where Lloris went did not matter, because Fernandes was solely worried about placing his spot-kick in the corner of the net, and he succeeded.

Come on keepers – this is too predictable.

Fernandes decided to mix things up himself, and they worked.

Sevilla’s Yassine Bounou was the next man to put up a serious fight against Fernandes, as he stood his ground when the Portuguese international stepped up to take a jump penalty.

This is where Fernandes’ technique and ability are superior to Jorginho. As we saw previously, the Italian international would just try to slot one low and to either side of the keeper in such situations, but failed to generate any power or height or even place it in the corner.

Fernandes, however, could guide the ball into the top corner despite jumping and got enough power behind the ball to do so as well.

Another variation, and this time, he absolutely laced it.

Fernandes attempted to mix things up against Newcastle as well.

After taking a standard run-up, Fernandes did not jump once again as he focused on the ball and looked to place it in the top corner again.

This time, however, his opponent, Karl Darlow, guessed right and was helped by some sub-standard placement, meaning that Fernandes missed his first penalty in Red.

Fernandes was at risk of missing two in two for the first time in his career when he faced Keylor Navas in the PSG goal.

In this case, Fernandes got no help from the keeper, who stood perfectly centrally as the Portuguese international jumped up.

This time, Fernandes tried to place it in the bottom-right corner, but his shot was brilliantly saved by the diving Navas. However, as is clear in the image, Navas was clearly way off his line, meaning that the spot-kick would have to be re-taken due to encroachment.

Navas should not have switched it up.

If you have been paying close attention, you might be able to predict what comes next. (Hint: Encroachment.)

Precision is a key facet of the short run-up, and that is exactly what was delivered here.

Fernandes has converted 95.45% of his jump-penalties, missing only one so far (which with his old technique, so after fully adopting the jump, he has a 100% record). Even if we add all the other variations in the pot, the Portuguese has an insanely high success rate of 93.33% from the spot. Clearly, there is no refuting that he is the king of penalties. 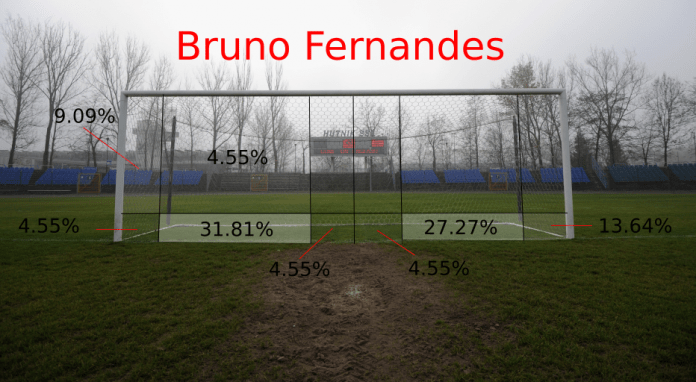 As far as Bruno bounce penalties go, the Manchester United man has a nice spread in terms of placement. Again, an overwhelming majority of his efforts are grounded, but his attempts to either side are well-split, with the left getting just a few percentages more than the right.

To conclude, we will take a look at Jorginho and Fernandes’ penalty stats side-by-side. Note that they have taken 20 and 30 penalties respectively (after their first jump attempt), so that is the data being used here.

It is quite clear here that although Jorginho invented the jump, Fernandes is certainly the greater master of the technique. Not only does he have a great conversion rate both overall and when jumping, but he also switches things up a lot more often, keeping goalkeepers guessing and thereby boosting his success rate. Further, his placement from jump penalties (corner shots) is also greater.

Therefore, if we had to crown one penalty king, it would be Bruno Fernandes, but Jorginho is not too far behind.

As far as the technique itself is concerned, while there are certain sets of people who believe that it, like the feint or stutter, should be made illegal, it would be hard to enact such a law unless having both feet in the air at the same time during the run-up is banned altogether.

And, at the same time, it must be noted that learning and using this technique requires a lot of practice. There is a good reason why nobody else is adopting it, so until it remains a niche skill, there is no point in outlawing it.

So, for the foreseeable future, expect more Jorginho jumps and Bruno bounces.