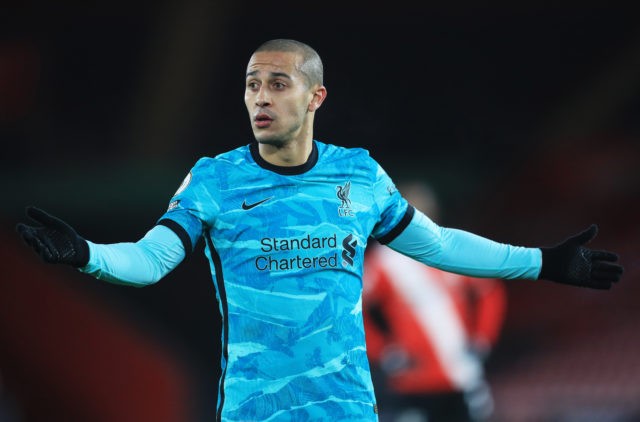 The popular Sky Sports pundit feels that the Reds are struggling to break down teams who are not allowing them space to dictate the game.

Manchester United have overtaken Liverpool in the Premier League table at the top, with the Reds badly struggling for consistency.

Merson has suggested that Liverpool are missing that ‘guile’ in midfield, which only the Spaniard can provide. He has also showered praise on Xherdan Shaqiri, saying the Swiss can put the ball through ‘the eye of a needle’.

“Liverpool are struggling without that guile in midfield,” said Merson to Sky Sports. “They’ll need Thiago to play every week. He’s the one who sees that pass.”

“I think Jurgen Klopp knows this now, because he’s even bringing Xherdan Shaqiri in, someone who you’d have previously thought might not play another minute for Liverpool. But he can put the ball through the eye of a needle.

“Without that, it takes the Sadio Mane, Mo Salah, Roberto Firmino X-factor out of the game. Liverpool are still the best in the world without the ball, but when there’s no space there, it gets taken away.

“Thiago must play every week. He can see that pass, and we’ve seen evidence of that in a couple of games. It might not always come off, but he sees it.”

The Reds have decided that they won’t delve into the transfer market to sign a centre-back this January, despite missing two key defenders in Virgil van Dijk and Joe Gomez through long-term injuries.

It means that the likes of Fabinho (and at times Jordan Henderson) will have to play at the back throughout the campaign. However, the Reds have enough depth in midfield, and it’s up to Klopp to use them properly.

Liverpool have been boosted by the return of Shaqiri and Thiago – two players who can add creativity in the middle of the park and provide killer passes for the front three of Roberto Firmino, Mohamed Salah and Sadio Mane.

Thiago, who is on £192k-per-week wages at Anfield, has hardly featured since joining from Bayern Munich due to injury. He is a world-class midfielder and could make a massive difference to the side once he gets back to full sharpness.

After a long time, we are witnessing an open title race. The Premier League champions have enough quality in their side, and their title challenge in the second half will largely depend on whether they can maintain consistency.