Manchester United are in the middle of a terrible media-created pressure. At one hand, fans are disillusioned whether at all there has been any progress since Louis van Gaal took over the managerial hot-seat at Old Trafford, as recent stats suggest United were at same points last season at this stage under David Moyes.

The other issue has been the future of Radamel Falcao, the Colombian striker on loan from Monaco, who seems have fallen out of favour of Van Gaal.

The Dutchman decided to leave him out against Southampton last week that resulted in a widespread speculation about his future. Van Gaal said the omission was due to tactical reasons, but that didn’t stop media to speculate on his future, and the situation can only get worse, as his agents got involved by criticising Van Gaal publicly.

The Daily Express claims that Falcao’s agent has hit out on Van Gaal, with a catchy headline – “Anyone Else Would Play Falcao” 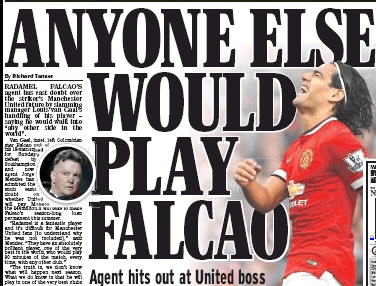 The Guardian’s Daniel Taylor writes today that next summer there will be another massive clearout by Louis van Gaal, after the Dutchman allowed 15 players to be sold or go on loan last year. Taylor claims Falcao’s future at the club is also under doubt. 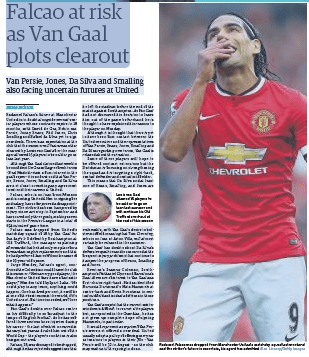 The Daily Mail has couple of interesting transfer stories; first, Serie A giants Juventus are plotting a move for Falcao and Chelsea won’t be able to sign Lionel Messi. 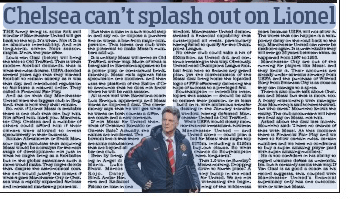 Daily Mirror speculates that QPR could sack manager Harry Redknapp, following a poor run of results. A defeat against United could see the former Spurs manager lose his job. 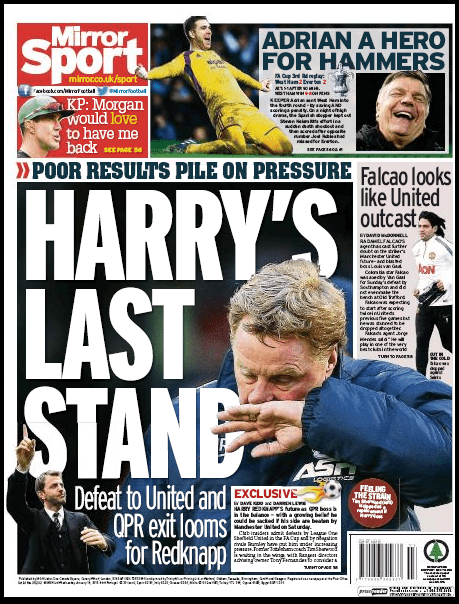