So, Chelsea and Manchester United move into the quarter finals of the Capital One Cup tie. At one point of time, in the first half, it seemed like Chelsea are playing at home, while the Gunners were chasing the shadows. They outplayed their opponents with sheer quality and deservedly earned a 2-0 victory against their London rivals.

Anyway, let’s get back to paper review. Wow, take a look at this from Daily Star…

£20m plus Karim Benzema for Luis Suarez? Meh. The first line of the report says – “Suarez still wants out of Anfield, despite Liverpool’s impressive start to the season.”

And one line after that: “But the Uruguayan has his heart set on a move to Carlo Ancelotti’s Madrid – and the Spanish giants hope offering Liverpool a big-name replacement for Suarez plus cash will tempt them to sell.”

Keeping all the factors – Suarez’s impressive start, Liverpool’s dream start, SAS partnership – aside for a while, just take a look at what Brendan Rodgers said only four days back.

“I knew once I got the commitment from him in the summer he wasn’t going to walk out,” said Rodgers.”He’s been great from then on.”

Well, it is true that Benzema is turning out to be a headache for Carlo Ancelotti but why-on-earth Liverpool would want to destroy all their good works by selling a world class player and buying an out-of-form striker? They claim it as exclusive – yeah, fabrication needs such exclusivity indeed. Nothing has been reported on Suarez regarding such move in top Spanish newspapers in the last few days. Top to bottom of this story is all but ridiculous.

French outfit AS Monaco are looking to renew their interest in signing Manchester City’s skipper Vincent Kompany, having apparently failed to sign him the Belgian in the summer, according to Daily Express.

Kompany is contracted at the club until 2018 and City owners will unlikely to sanction the sale of the defender who has been a colossal figure at the club. 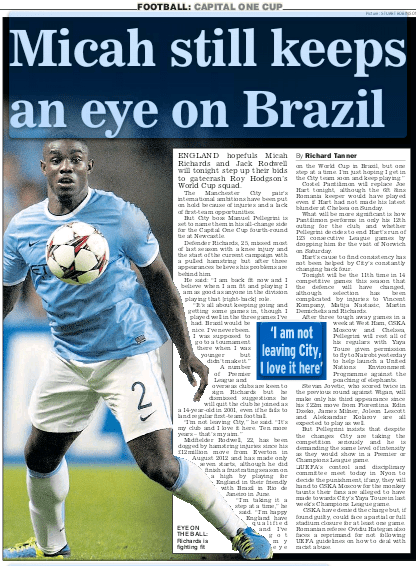 Manchester City defender Micah Richards says he is not looking to move elsewhere, rather he is focusing on a long term career at the Etihad. “I’m not leaving City it’s my club and I love it here. Ten more years – that’s my aim.”

Manchester United are looking to offload Anderson to any club that will meet their £8m asking price. And finally, Liverpool defender Daniel Agger has rubbished claims on twitter about the rumours of him leaving the Anfield club.