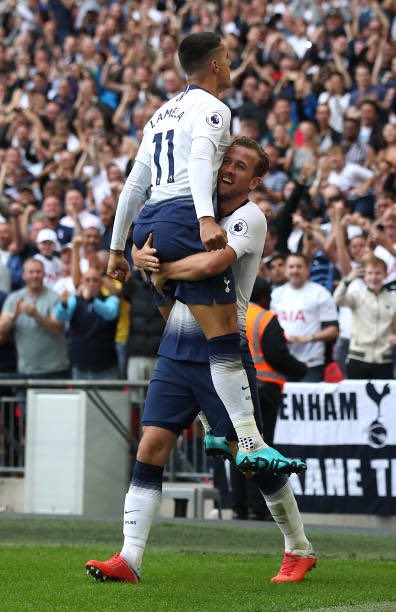 Tottenham managed back to back Premier League wins after beating London rivals Fulham 3-1 at the Wembley Stadium on Saturday.

Harry Kane scored his first Premier League goal in August as Spurs maintained their unbeaten run in the season. It looked like the England striker’s barren run will continue after he had a goal ruled out and hit the crossbar at Wembley.

Fulham, who lost their opening game against Crystal Palace, levelled after the break with Aleksandar Mitrovic nodding in from close range.

It needed a moment of sublime quality and inspiration to break Fulham’s resilience and it was provided by Kieran Tripper who restored the lead with a stunning free-kick.

2 games 6 points. Brilliant. Some of our players still recovering from WC duties. Was with MP and it is great to see him and his “kitchen cabinet” so positive and confident. COYS

Another former player, Graham Roberts also took to Twitter, to praise Erik Lamela, who made a brilliant run from midfield to set up Kane for the third goal. He tweeted:

Nice start to the season loved @LucasMoura7 performance today worked so hard and great goal also @ErikLamela superb when came on and the man @HKane got us his August goal another 50 goals to come this season ?? COYS

Spurs didn’t sign a single player in the summer transfer window. However, they do have a star studded squad, and are well capable of mounting a serious challenge for the Premier League title this season.