Oscar has been a revelation for Chelsea this season under Jose Mourinho. The Brazilian has been the first choice no 10 for the Blues, and with 9 starts and 4 goals in the Premier League, he is by far the best player for the West London club. 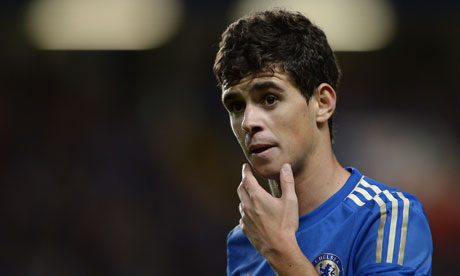 Since the start of August, Oscar has played 18 games for both club and country, and by the time it reaches May, it could a long season for him – the natural concern of tiredness creeps in. But, Oscar feels otherwise.

“Love for Chelsea and Brazil is what gives me energy. I want to win trophies with Chelsea and win the World Cup,” said the youngster to Globesporte.com.

The 22-year-old has been the key player for Chelsea identified by Mourinho and Oscar feels the confidence of his manager is the sole reason for his excellent start to the new campaign.

“I am happy to play for a big club like Chelsea and have this responsibility that Mourinho gave me. I feel no pressure here as living the same situation in Brazil where there are many expectations. Mourinho showed great faith and confidence in me.”

In football, mistakes are bound to happen. However, Oscar says Mourinho always speaks with him, even if things are not going right. He says the Portuguese is more concerned with the effort an individual puts in to the team.

“I hope Mourinho stay at Chelsea for many years. We will be able to play better as time to spend with Mourinho, it will train more and have success as a team and individually.

“Mourinho will not just make my game evolve. If we continue as we have been playing, it will take us to many titles. I hope to score more and be one of the most important players.”

Oscar revealed that Mourinho got very angry with Chelsea’s poor performance against Newcastle, a game where the Blues lost 2-0 at the St James’ Park. The Brazilian says that he fears the wrath of his manager and insists the rule in football needs you to bounce back and prove in the next game.