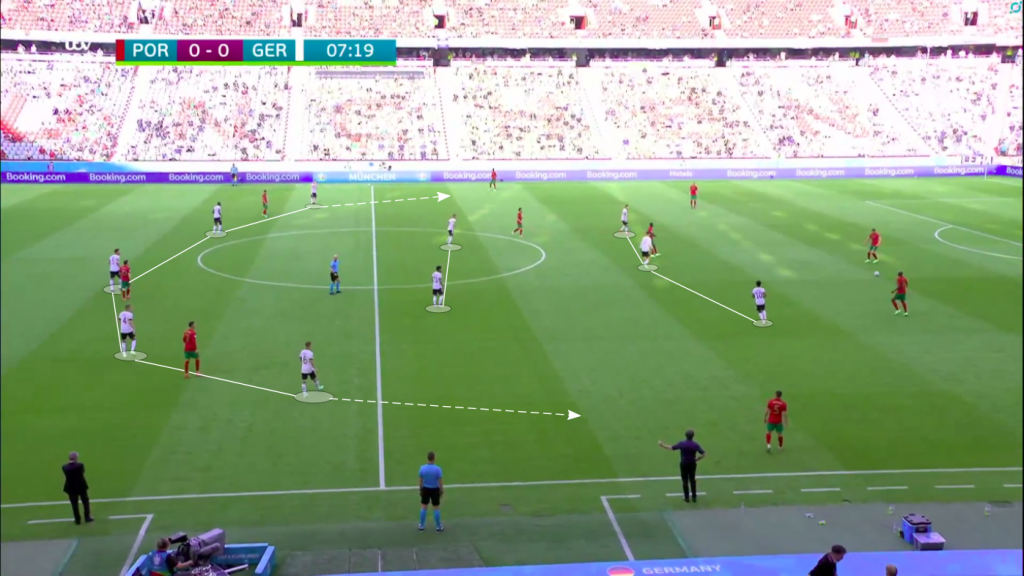 The group stage of Euro 2020 is done and dusted, so now it’s time for the really serious business – the knockout phase.

We are getting straight into them with some huge matches in the round of 16, including a bumper match at Wembley Stadium where England will host Germany.

The Three Lions topped Group D on seven points with three clean sheets from three games, and although some of their performances were not the most convincing, the results speak for themselves.

Die Mannschaft finished second in Group F (the Group of Death) with a loss against France and a thrashing of Portugal among their results.

The two have now been drawn on the easier side of the bracket as Belgium, Portugal, Italy, France and Spain will come in each other’s path before the final.

Netherlands are the only conventional ‘big team’ that England or Germany might face in the semi-finals, but before they can get there, one will have to be eliminated in the round of 16.

So, before their big clash, here is our analysis of Germany against the backdrop of their clash against England, where we will explore how Joachim Löw might set his side up and how Gareth Southgate should combat that.

Germany have largely stuck to the same line-up for their group stage games, but some changes are expected before the Round of 16.

Löw adamantly stuck to his 3-4-2-1 system during the group stage even though he received a fair bit of criticism (especially after the loss to France), so the formation should be expected to remain constant.

The defence is quite well-settled, with Manuel Neuer’s goal protected by Matthias Ginter, Mats Hummels and Antonio Rüdiger in a back-three.

Joshua Kimmich and Robin Gosens should continue as wing-backs too, but there are a few dilemmas thereafter.

With Leon Goretzka fit and firing now (his goal was the one that saved Germany from being knocked out against Hungary), he will probably partner Toni Kroos in midfield instead of İlkay Gündoğan.

If fit, Thomas Müller should be back in the XI. Otherwise, Kai Havertz and Leroy Sané will take up the two positions behind the striker, who could be either Serge Gnabry or Timo Werner. 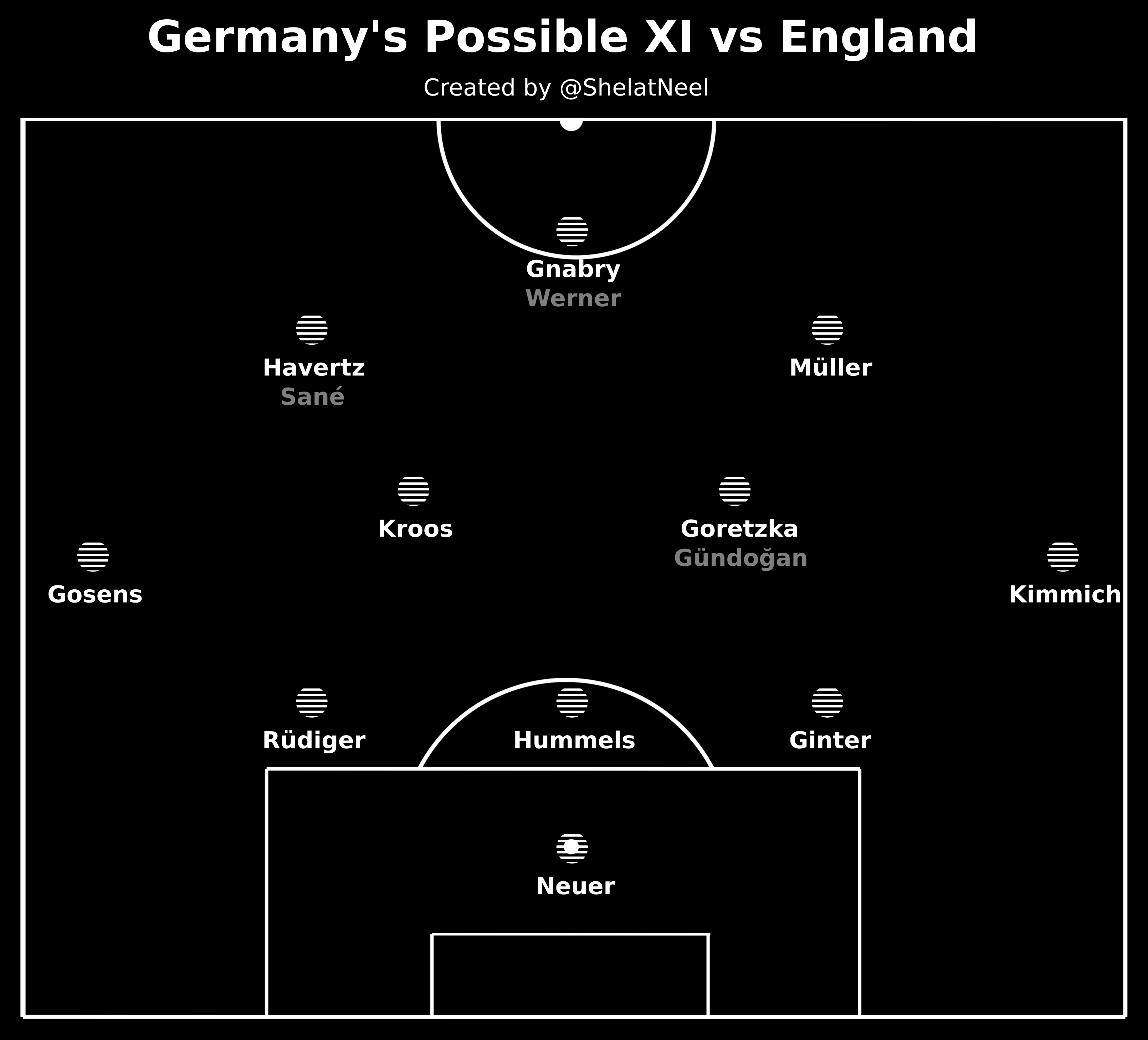 Certain reports are suggesting that there is a possibility of Löw switching to a 4-2-3-1 or 4-3-3.

While that is unlikely, this would see Gosens replaced by Marcel Halstenberg on the left of defence, and Ginter would make way for an attacking midfielder such as Jamal Musiala or a third central midfielder (so Gündoğan, Goretzka and Kroos would all start) depending on the formation used.

The last time Germany used a back-four was six matches ago against North Macedonia in March, so we will analyse them in the back-three system because our focus is on the Euros.

Having scored six goals in their three games, Germany certainly are an offensive threat, so let us see how they try to unlock opposition defences.

While building from the back, the wing-backs push forward, vacating space out on the wings for the wide centre-backs to split away.

Manuel Neuer’s capabilities on the ball mean that he has a key role at the centre of a back-three, while the most central defender (Hummels) pushes forward, sometimes even operating as a midfield pivot. 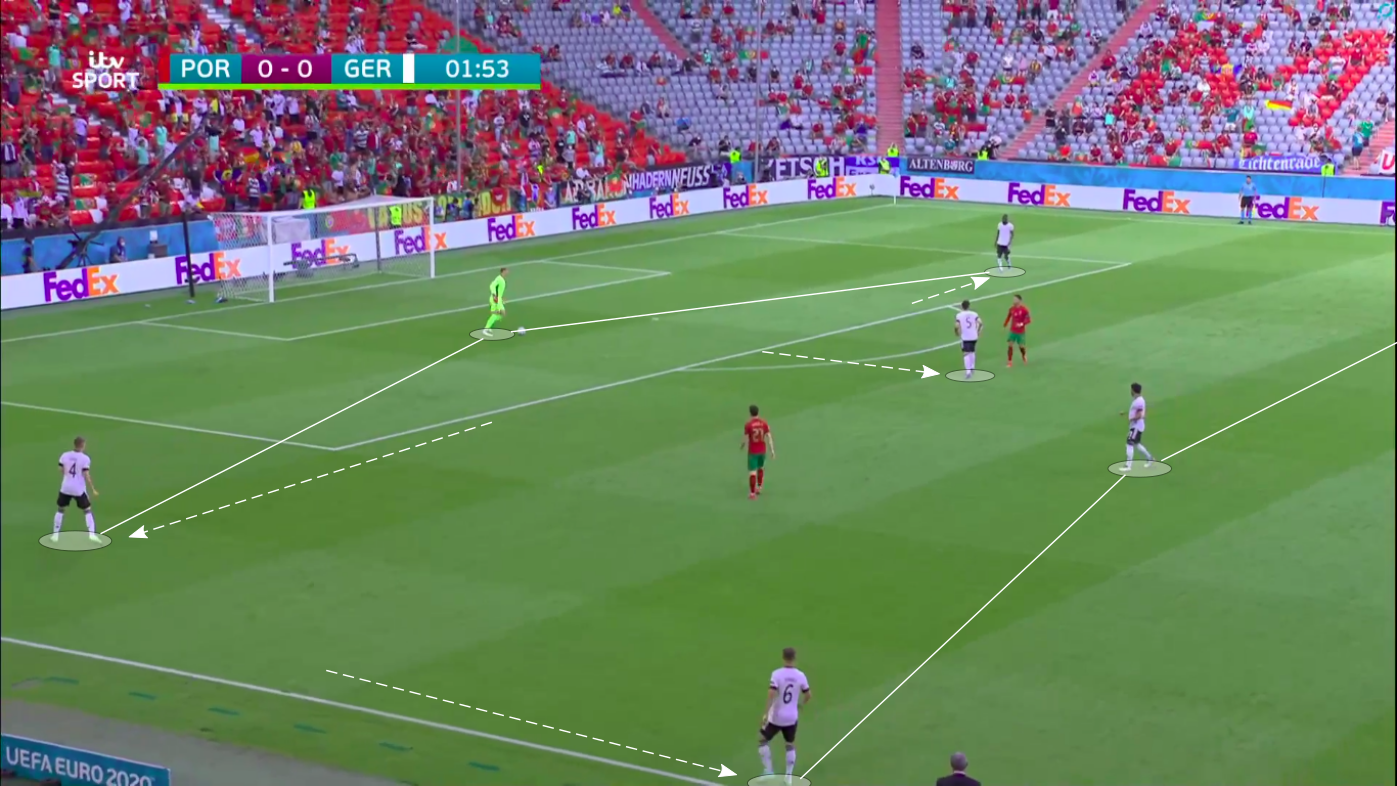 Further forward, their shape transitions into a 3-2-5 as the midfield duo operates in front of the three centre-backs, while the wing-backs push far forward as the front-three tuck inside and become very narrow. 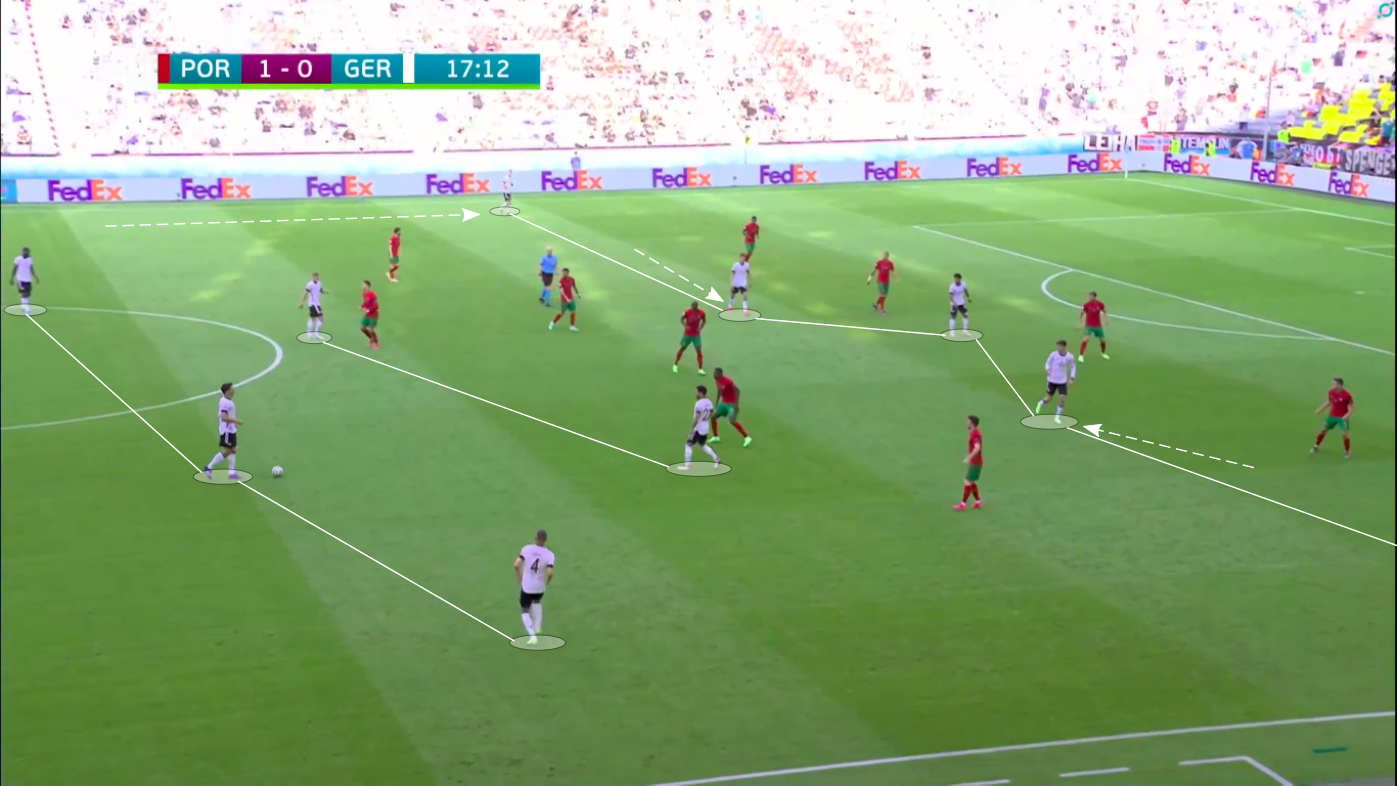 The second thing that the forwards tucking inside does is that it outnumbers the centre-backs in a back-four, forcing the opposition full-backs to come narrow and leave space out wide.

With the space on the flanks created for the wing-backs to run into, the next objective for Germany is to find them.

One of their favourite ways to do so is by switching the play with a long crossfield ball directed to such areas, as is the case in this example where Ginter is seeking out Gosens. 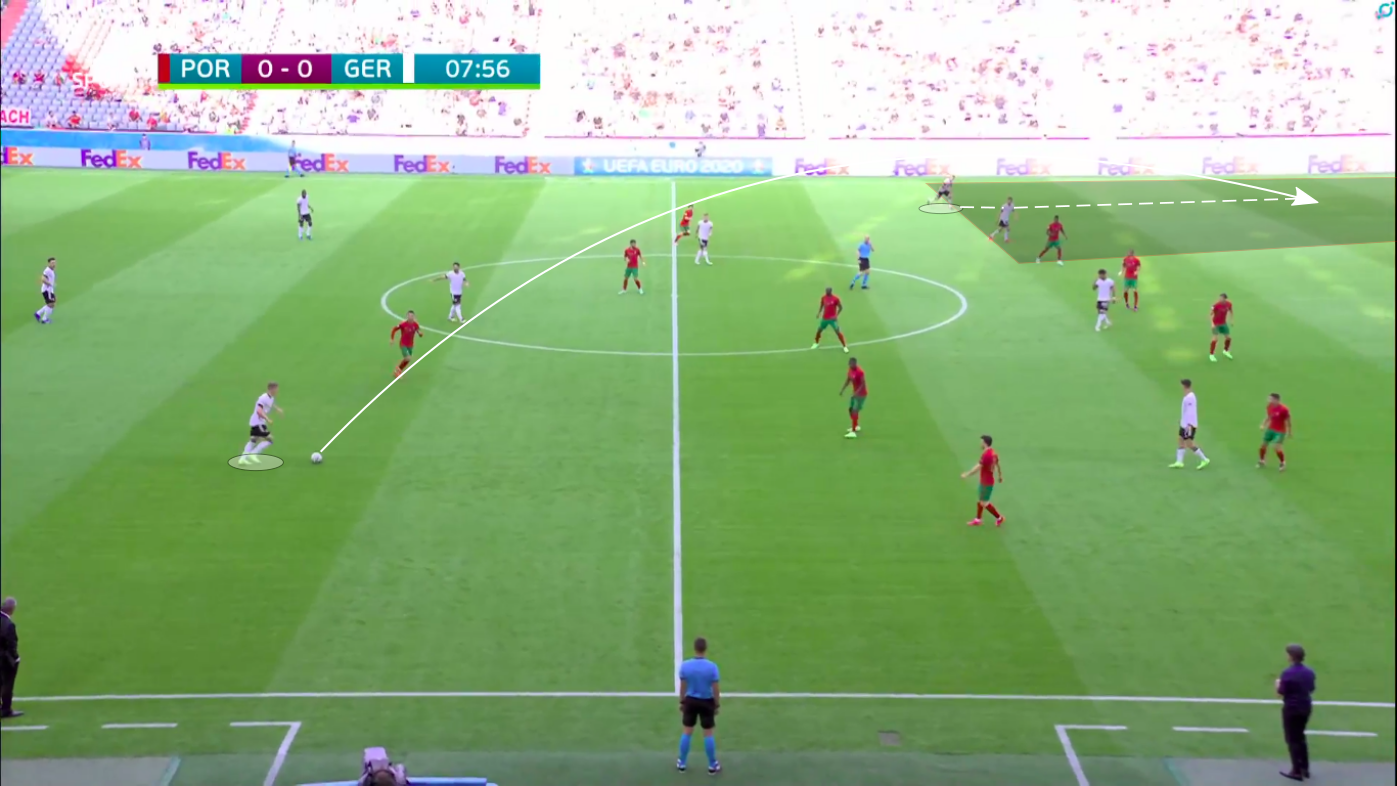 They have been using this as their main attacking ploy to find the wing-backs throughout the tournament, as this visualisation depicts: 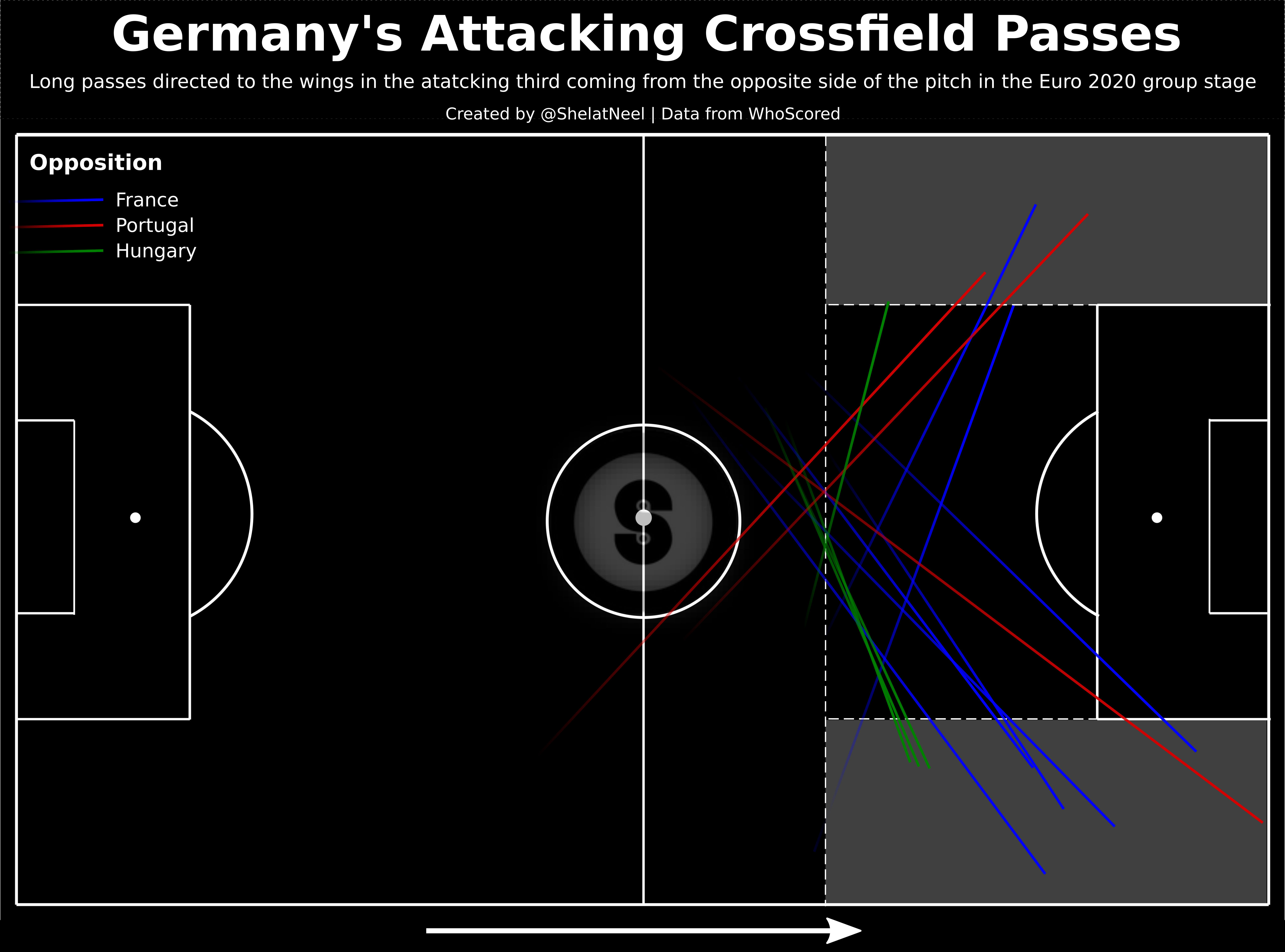 Unsurprisingly, Germany are second-highest in the tournament in terms of overall switches with 64, only behind Spain (who have had over 7% more average possession).

As far as players go, no one apart from Toni Kroos has even reached 20 switches, while the Real Madrid midfielder has racked up 27.

The final piece of the puzzle then is to deliver balls into the box, which is another area where Germany have excelled as they are second in the tournament both in terms of crosses completed and crosses attempted with 20 and 82 respectively.

Their wing-backs have done a great job of delivering balls into the box, with no other pair of wide defenders managing to match Kimmich and Gosens’ seven accurate crosses into the penalty area.

Ginter has the most freedom to overlap among the three centre-backs, so he too pops a ball into the danger area from the right from time to time. 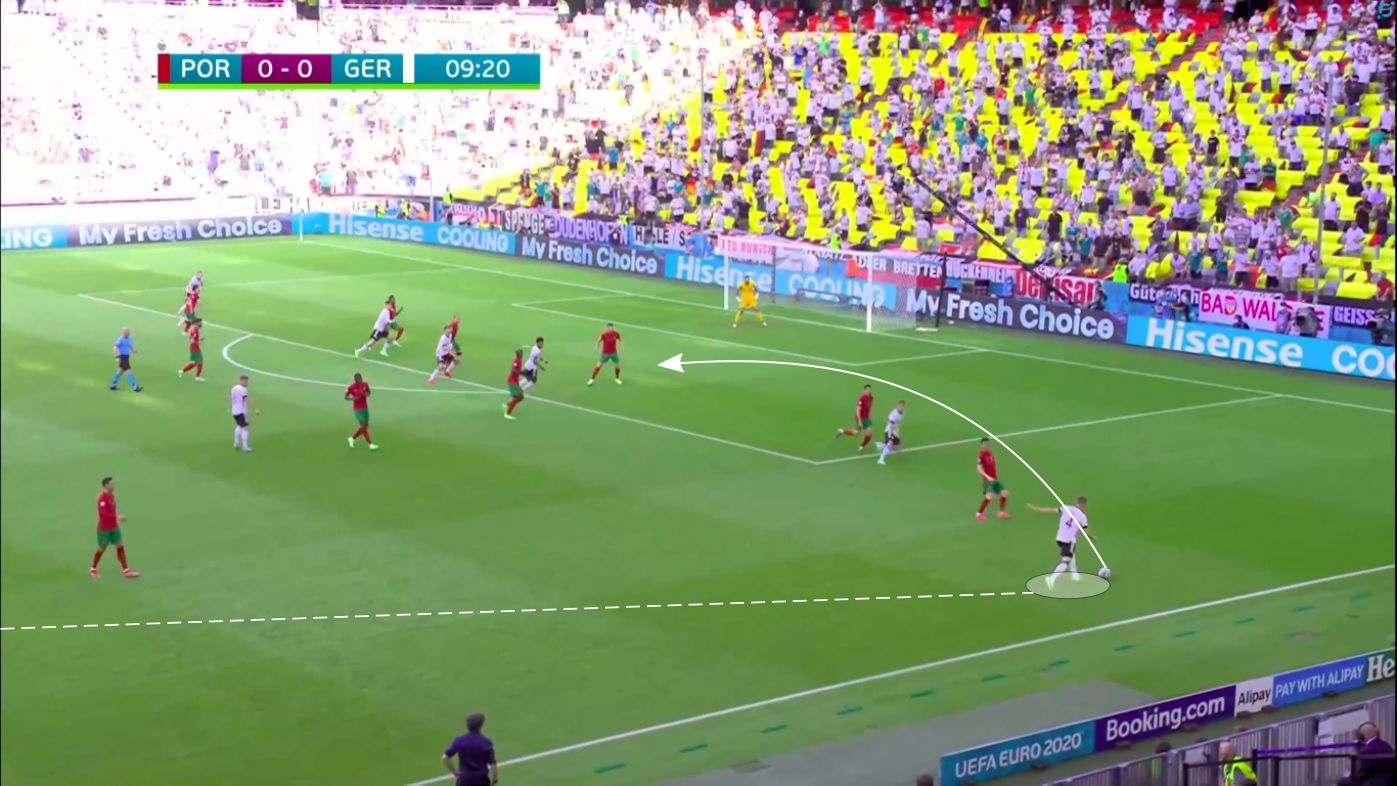 In either case, once Germany do get into a crossing position, it is tough to stop them as they have at least three or four attackers positioned perfectly to pounce on any chances created.

Given the quality that their wing-backs possess, it’s unreasonable to try and congest the box to defend for your lives either, so the goal from a defensive perspective has to be to prevent Die Mannschaft from accessing the wide areas around the box.

The first approach to combat this would be to do what France did, especially in the second half of their match – ask the wide midfielders (in a 4-3-3) to go out to the wings to track the German wing-backs in the defensive third.

This would, of course, mean ceding possession to Germany’s and having the midfielders do a fair bit of defensive work, but even though it’s not the most eye-catching approach, it probably is the most effective. 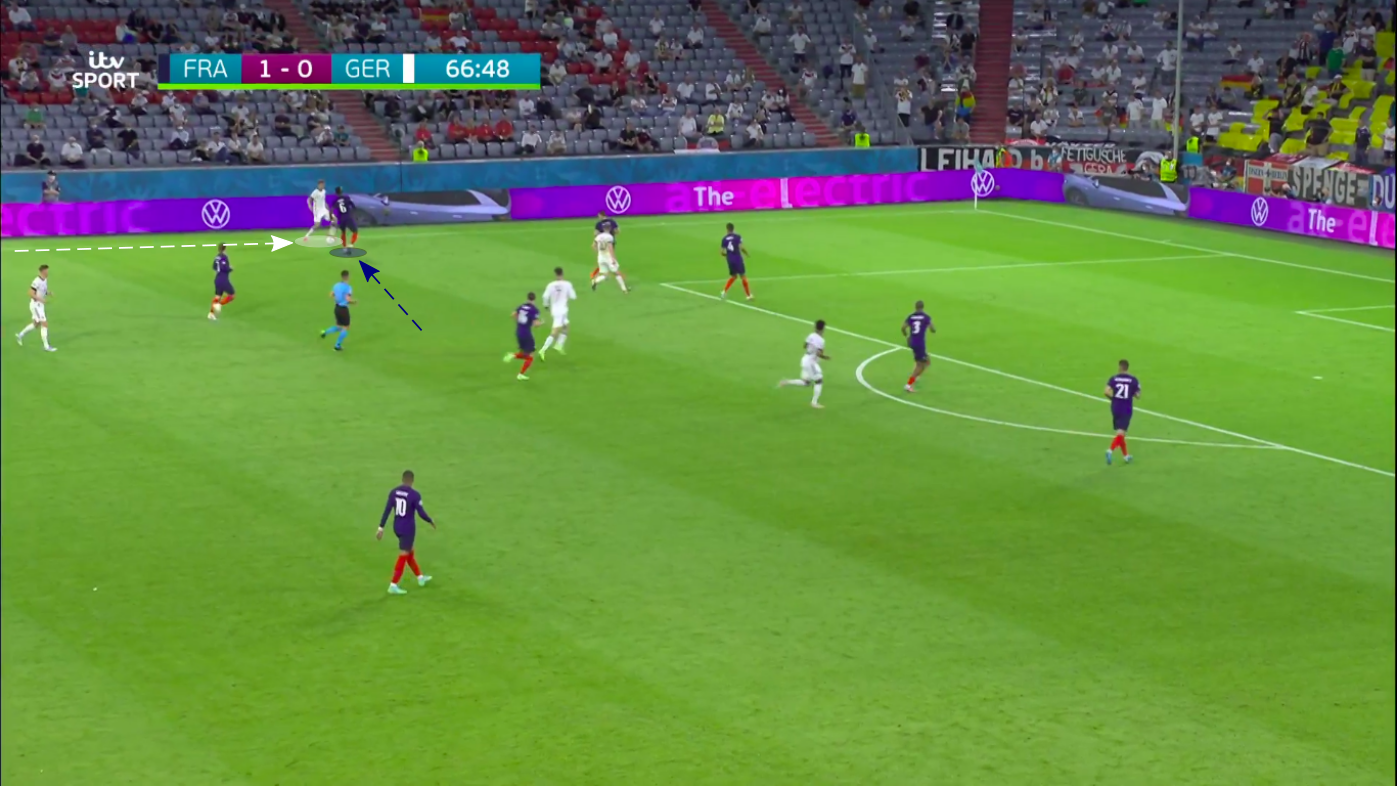 The alternative would be to switch to a three centre-back system and match Germany’s front-five man-for-man as Hungary did, but this would have massive ramifications on England’s overall style of play, so it might not be something that Southgate should toy with. 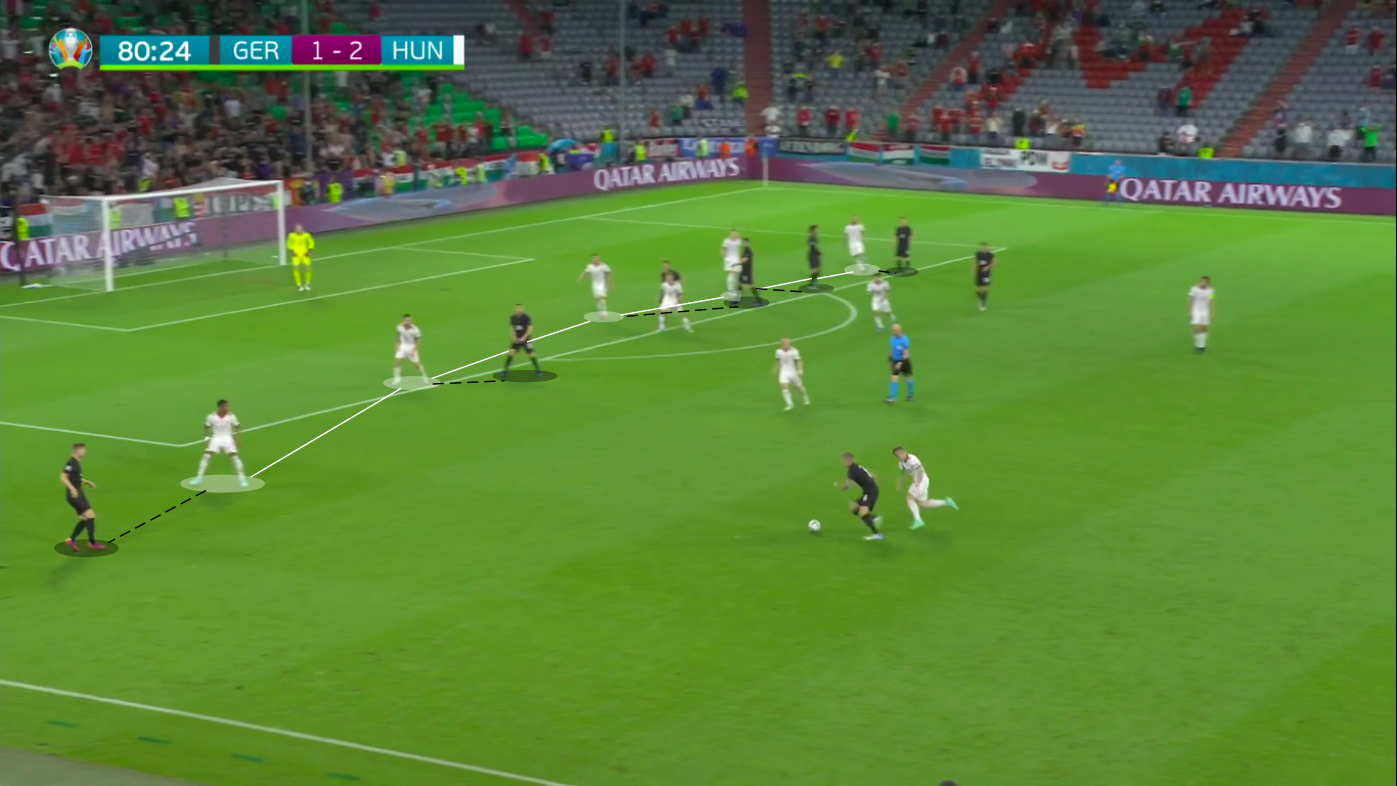 Besides scoring a lot, Germany have conceded a fair few in the group stage too (five goals to be precise), so there certainly are avenues for England to trouble their goalkeeper.

Die Mannschaft defend in a 5-2-3, where their wing-backs are encouraged to push forward if the ball comes out wide.

Germany don’t press too vehemently but do look to maintain a relatively high defensive line, and with three centre-backs that are not strikingly quick (especially Hummels, whose top speed of 27.9 km/h in the Euros is a bit worrying), this can be exploited. 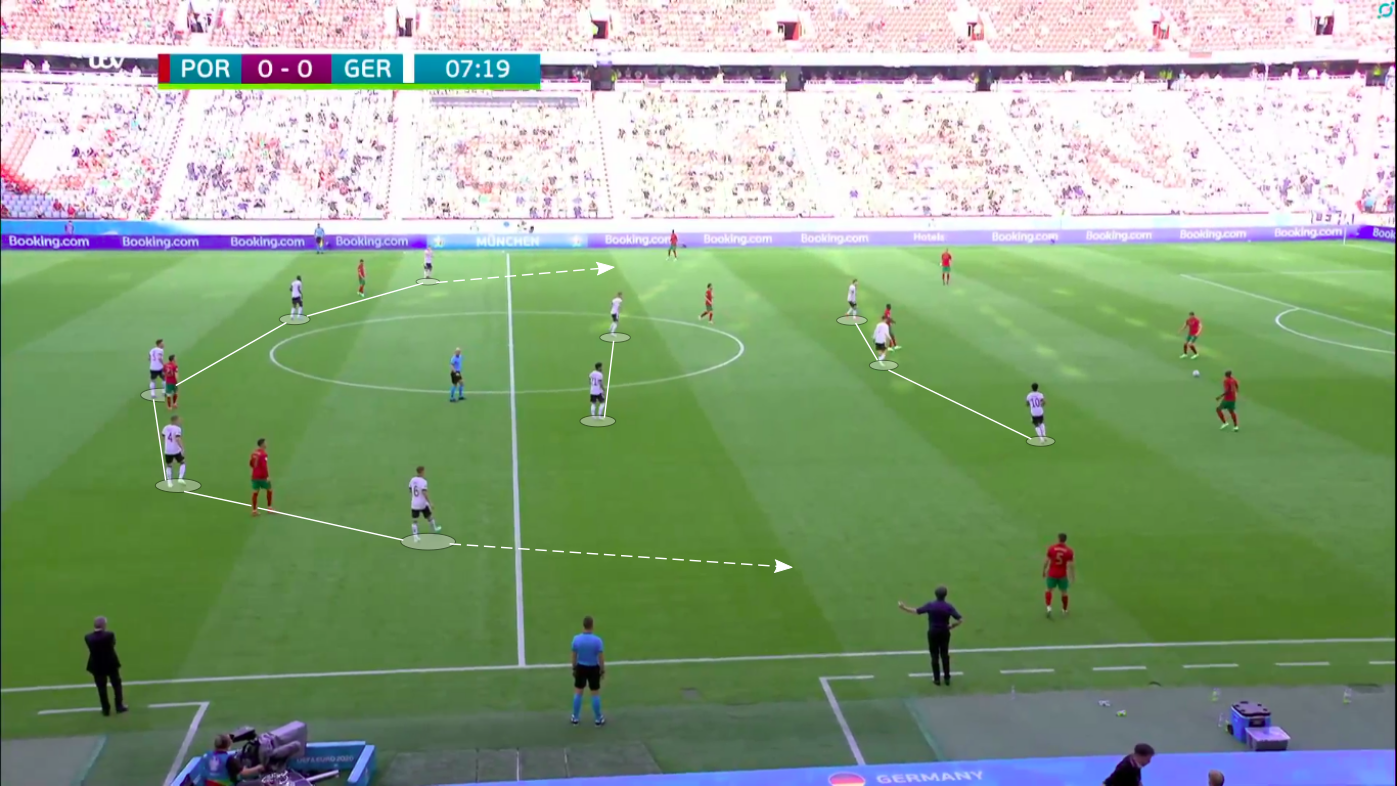 There have been questions raised of the midfield as both Gündoğan and Kroos are not the best at the defensive aspects of the game, but the inclusion of Goretzka should put those concerns to bed.

Crucially, though, the wide attackers are not asked to track too far back, which is why opponents can find themselves in space out wide if everything is worked out properly.

This is further proven by the fact that two of Germany’s five goals conceded came as a result of crosses from either flank, with a full-back in Lucas Hernandez providing one. 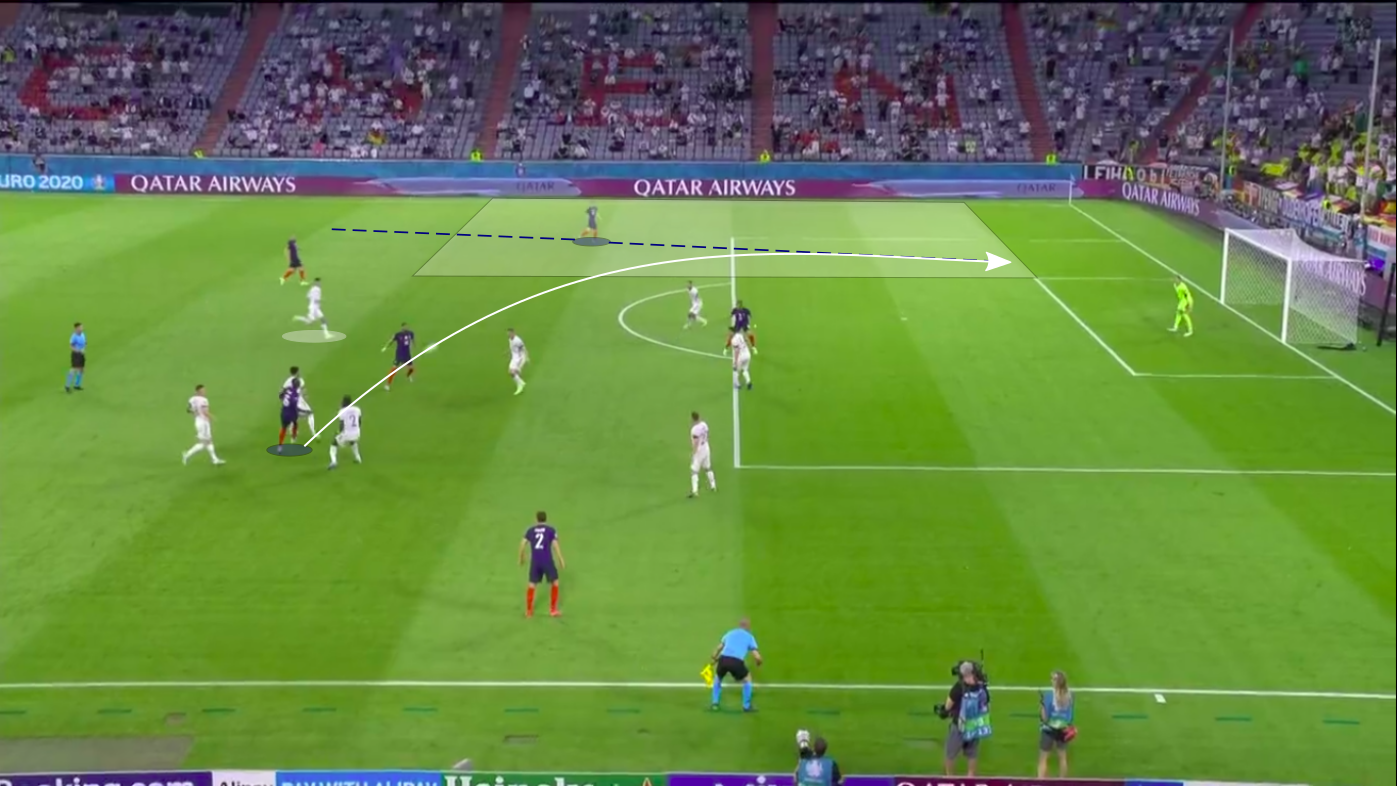 Germany have been caught out in transition on a couple of occasions, none more prominently than when Cristiano Ronaldo opened the scoring for Portugal after breaking from a corner, where Havertz was somehow the last defender. Puzzling. 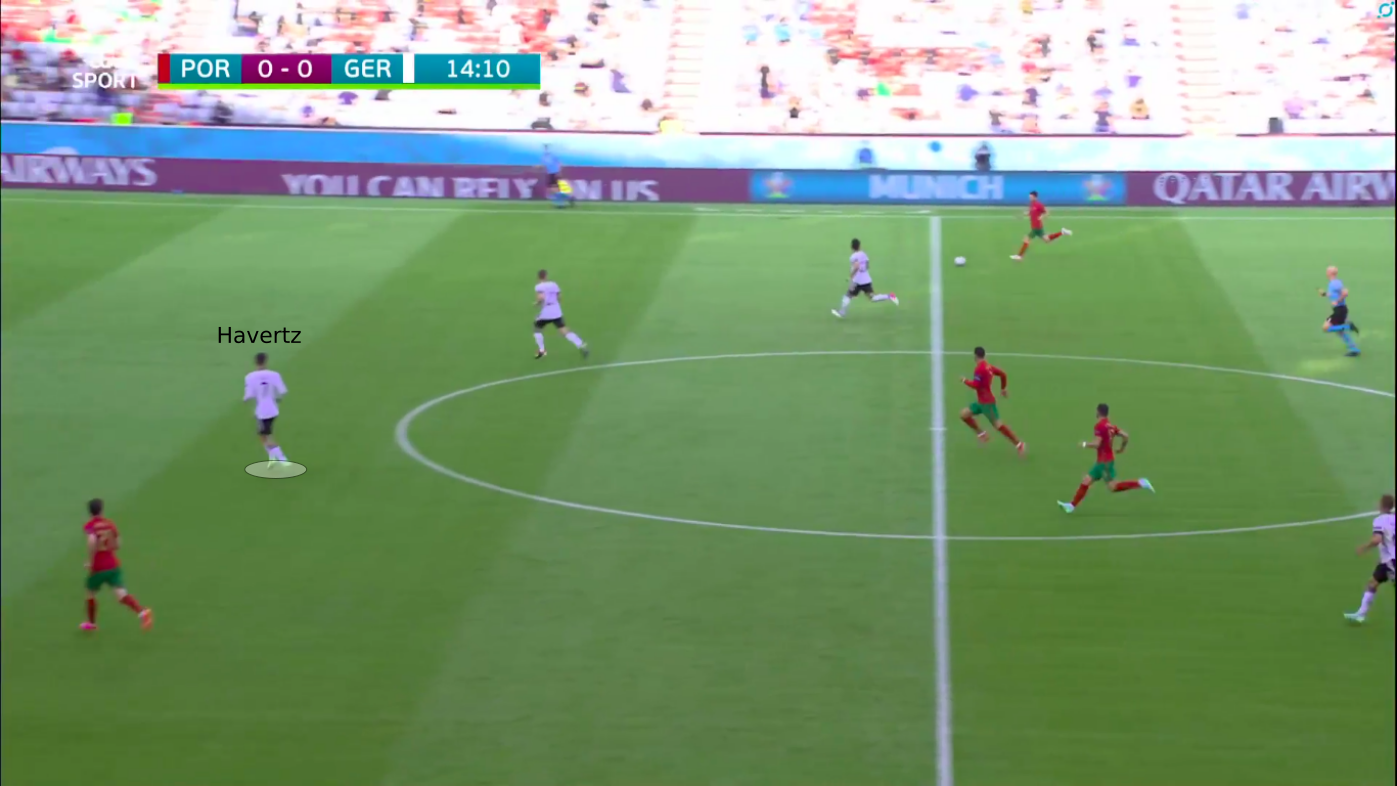 Although Germany only picked up four points from their three group games with a couple of flat performances, they should not be underestimated in any way.

Die Mannschaft have the players and a system which on its day can rip any side apart, so England must be cautious with their approach to this game.

Southgate’s XI should be quite similar to the one we saw against Croatia apart from the potential use of a 4-3-3 and, obviously, the inclusion of Harry Maguire, so Germany should have an idea of what they will come up against on paper at least.

The same can be said for England, so the pre-match preparation and understanding of the opponents could prove key in this tie.

But, with all that said and done, such games often boil down to one moment of magic, madness or misfortune so they are impossible to predict, and that’s why we love them.

Stats (all accurate as of the group stage) courtesy UEFA and Fbref.