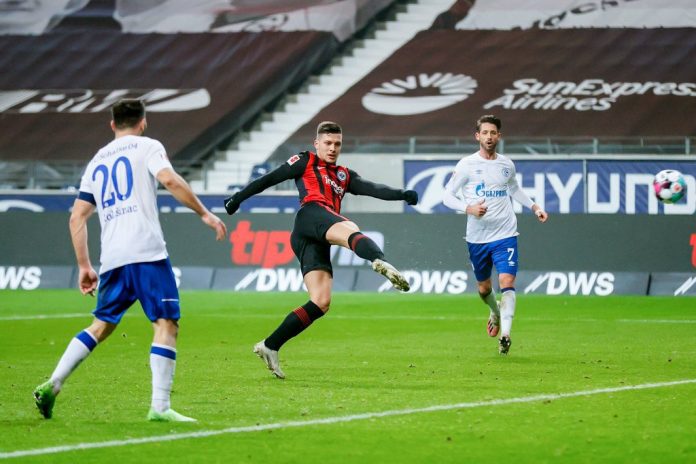 Luka Jovic was signed in the summer of 2019/20 for 60 million Euros after Real Madrid and was earmarked as the answer to Madrid losing Cristiano Ronaldo’s goals.

The Serbian arrived at the Spanish capital with high expectations after scoring 27 goals with Eintracht Frankfurt and was expected to contribute 20+ goals per season.

However, those expectations were crushed by Zinedine Zidane who barely made use of the 23-year-old striker. In one and a half seasons, Jovic scored just two goals for Madrid before being loaned out to his former side Frankfurt earlier this January.

However, the striker has not looked back since leaving Madrid and made an instant impact in his debut with the Eagles in the Bundesliga.

Jovic was brought on in the 70th minute and subsequently scored two goals in quick succession to seal an important 3-1 win over Schalke 04.

In just 30 minutes of football with Frankfurt, the Serbian has scored the same number of goals he has scored at Madrid in one and a half seasons.

This performance will certainly be a slap on the face to Zidane who had written off Jovic on multiple occasions by leaving the player on the bench when needed most.

Jovic is not the only player to prove Zidane wrong as former Madrid stars such as Marcos Llorente, Sergio Reguilon, James Rodriguez and Theo Hernandez have all hit the ground running since leaving the club.

This is just the beginning for Jovic who looks hungrier than ever to score goals and prove a point that he can return to the Santiago Bernabeu and be a regular starter for Los Blancos.