As the January transfer window edges ever nearer, various transfer sagas are starting their engines. One such vehicle concerns the imminent future of one Xabi Alonso; former Liverpool creative hub, and soon to be out of contract at his current club, Real Madrid.

Alonso has been plying his trade at the Bernabéu for the last four years, ever since his £30m move from Anfield. His time in the Spanish capital has been a successful one, with the Spaniard winning the Copa Del Rey in 2011, and La Liga in 2012. He also picked up a Supercopa de Espana winners medal, and was voted the Best Midfielder in La Liga for the 2011-2012 season.

Yet the 31-year-old’s future is slowly becoming a regular subject in the British press, with the player as yet to comment on where his future lies.

There have been conflicting reports linking Alonso to a move back to the Premier League, and conversely with a new contract with Los Blancos. The Guardian reports that Liverpool are eyeing up a plunge into the transfer market come January, with a move for Alonso hot on the agenda. Yet, the Daily Star insists the player is set to commit to a new contract in Madrid.

Such uncertainty over his future will surely have peaked the interest of the EPL’s biggest and brightest clubs, and a bid to test the Madrid resolve could appear. Chelsea, Manchester United and Liverpool have all been linked with a move for Alonso; and the thought of bringing him back to his former hunting ground at Liverpool will have many fans excited.

Xabi Alonso achieved something of an ‘honorary Scouse’ status during his spell at Anfield; with adoring fans praising his deep-lying distribution, and effortless free-kick ability. He was part of the hugely successful ‘Rafa’ period at the club, which saw Liverpool win the Champions League in 2005, and come the closest to securing a maiden Premier League win in the 2008-09 campaign. 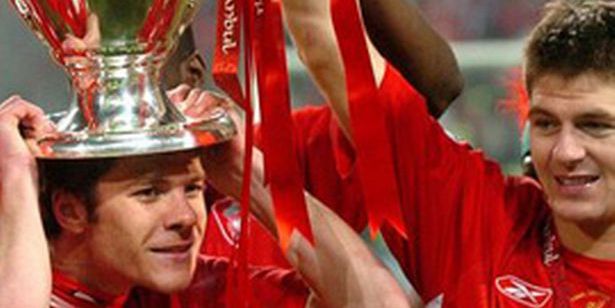 A return to Anfield would surely be beneficial to the current Reds side. Brendan Rogers is formulating a youthful setup of dynamic attacking vigour at the club, and an experienced head would aid this.

While well stocked in the final third, Liverpool have little in the way of creative vim in the centre of the park; an area where Alonso still thrives to this day; one of the key reasons we gave for Liverpool to resign the player back in September when the situation first arose.

The club currently have Steven Gerrard, Lucas, Jordan Henderson, and Joe Allen on the books in this position. Arguably, only club captain Gerrard has the sufficient passing capacity to be considered the creative hub; with Lucas an obvious destroyer, Allen not considered an essential cog, and Henderson still on the path to overall improvement.

Alonso would fit in seamlessly, providing Gerrard with the freedom to venture forward, further aiding the attacking triumvirate of Suarez, Coutinho and Sturridge. While being the wrong side of 30 may detract from his ability to steam around the pitch, helping Lucas provide cover for the backline; he has the tactical experience to more than make up for the fact.

Rogers’ 3-5-2 formation has worked to a large extent, but Alonso’s presence would enable the Liverpool boss to further implement a Plan B formation. A return to a four-strong backline would allow for greater depth in the centre of midfield, and further security for Alonso to pick out spectacular passes.

If Alonso is keen on a return to the Premier League, Liverpool will face strong competition from Jose Mourinho’s Chelsea. The Portuguese boss managed Alonso during his spell as Madrid coach, and the Spaniard was one of the few players who publically spoke well of the enigmatic manager.

Regardless of potential rivals, Liverpool should push strongly for Alonso’s signature. He represents great value as a free agent, and despite the club’s policy of signing predominantly young, exciting talent; there must surely be room to manoeuvre if the opportunity to bring such a special player materialises.