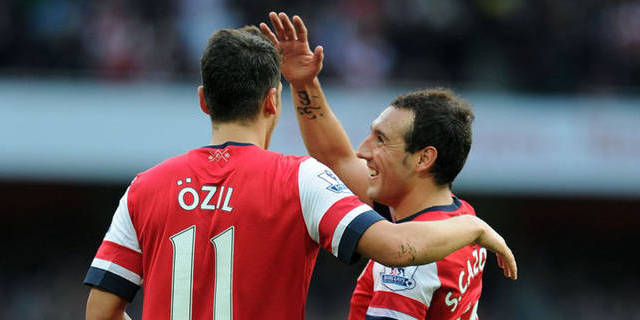 According to The Sun, Arsenal playmaker Mesut Ozil will only sign a new deal if he can have Jack Wilshere’s No.10 shirt. The latter inherited the jersey from former striker Robin van Persie in 2012 and has worn it ever since. But Ozil, who currently wears No.11 for Arsenal, wants the number to link to his brand.

The German international, whose Instagram handle is m10_official, has stalled on talks for a number of months and could leave for nothing next summer if doesn’t put pen to paper this season. Ozil is believed to want a significant increase on the £150k-per-week contract he’s receiving now.

Arsenal are keen to get into negotiations before the former Real Madrid man can legally sign a pre-contract deal with foreign clubs in January. However, the midfielder’s reported insistence on taking Wilshere’s shirt could be a stumbling block.

Wilshere, 25, is also out of contract in the summer but has shown no indication that he will relinquish his shirt if he stays on for another season. Ozil might be made to settle with his No.11 jersey. He’s made nine Premier League appearances for Arsenal this season, contributing three goals.

His future at the Emirates Stadium is in doubt, and the club most likely to pick him up appears to be Manchester United, with manager Jose Mourinho an admirer of the 29-year-old. Movement is unlikely to be made until January, however.