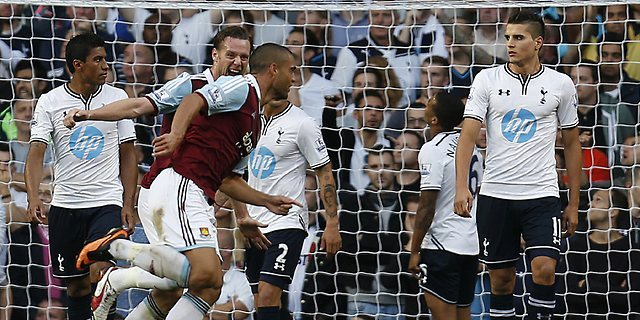 Tottenham suffered their second defeat of the season yesterday after losing 3-0 to West Ham at the White Hart Lane. It was their second London derby in a row (last weekend faced Chelsea) and in both the games, the North Londoners have failed to earn a victory. Most importantly, they were comprehensively beaten at their own backyard by the Hammers.

They are sixth in the table, just three points behind the league leaders – hardly anything to worry and panic about.

But there are some issues which Andre Villas-Boas must address immediately. After yesterday’s game, despite racking up 13 points in the league – Spurs have just scored 6 goals in the league – only the bottom 5 clubs have scored less than them.

Of all the top 10 clubs, only Hull City have managed 6 goals so far, along with Spurs. All the other potential rivals have scored more than them.

We all know that Spurs are experts in grinding out results. How many times last season they won by a 1-0 margin as the Welsh bloke called Gareth Bale found the target frequently. But this season was supposed to be different. They have replaced Bale and have spent money on several world class players this summer to bolster the attacking unit, breaking club transfer records on three occasions.

Striker Roberto Soldado, the new summer signing from Valencia has scored two goals so far and none of them are from open plays. Erik Lamela has been mostly used in the Europa League games while the goal scoring onus has been taken up by Gylfi Sigurdsson  – the top scorer of Spurs with 3 goals.

Given the amount of money Spurs have spent on attacking players like Paulinho (though he scored one goal), Eriksen, Chadli, Lamela and Soldado –surely AVB would expect more return from this. Defence was supposed to be a major headache for the North Londoners but it seems it’s the attacking areas of the pitch which is causing more trouble.