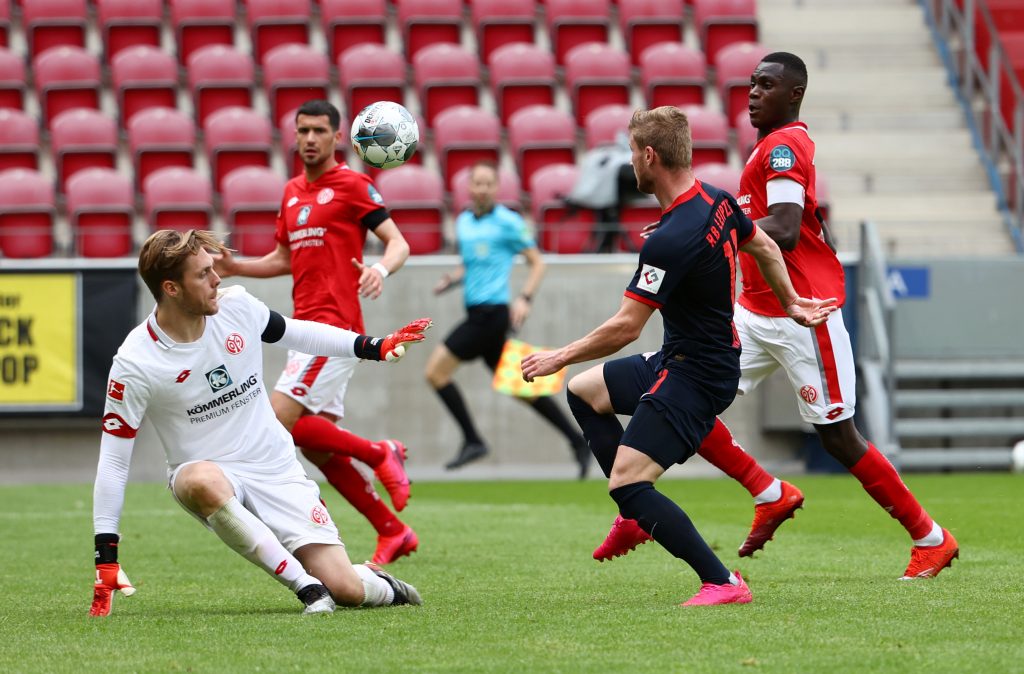 Mainz welcomed Leipzig, who needed a win to keep their diminishing Bundesliga title hopes alive. Leipzig started well, and Werner ended his goal-drought early on as he arrived late to a low Laimer cross and calmly slotted it in.

Poulsen seemed to have picked up an injury, but he was able to continue, and celebrated his 250th game for his club with a header which went in from a Sabitzer cross.

A mistake from Kunde saw Leipzig in again. Poulsen tried to cross but it was blocked, Nkuku was denied by Müller from no range, as the ball fell to Poulsen again, who set it up for Sabitzer, who placed it into the top corner.

Leipzig dominated possession throughout, and denied Mainz any clear-cut chances. Mainz switched to a back 4 in the second half, but this had no great effect, as Kampl was able to waltz past St. Juste and set up Werner for a tap in.

The home side were caught napping again when Poulsen took a quick free-kick which allowed Werner to complete his hat-trick.

Mainz started creating chances late on, but couldn’t get anything substantial, and the match finished 0-5 to Leipzig.

Mainz were clearly set up to defend and hit Leipzig on the counter attack. Their resistance didn’t hold for too long, though, as Leipzig were able to score twice within the first 25 minutes, as they looked to move the ball wide and then drill crosses in. Werner dropped very deep at times, helping Leipzig gain a numerical advantage in midfield which helped them move the ball wide quickly. This also caused chaos in the Mainz back 3, as no on was able to pick up Werner.

Mainz switched to a back 4 at half time as Bruma was brought off for Mateta. This really didn’t change the match. At the end of the day, Mainz were completely overrun in midfield, both in terms of quality and quantity. The game was decided there.

Nicolai Müller – Couldn’t have done much to stop the goals. Made lots of great saves but his defence let him down. 3.5.

Jerry St. Juste-  Poor throughout the game. Made costly mistakes which led to the fourth goal. Caught napping for Leipzig’s fifth. 3.

Jeffrey Bruma – Not a great match for him. He was nowhere near Werner, who caused all sorts of chaos for Mainz. substituted for the striker Mateta at half time. 3.5.

Moussa Niakhaté – Couldn’t do anything to prevent 5 goals. Was beaten in all sectors by the Leipzig attackers. 3.25.

Bote Baku – Helped out a lot defensively, but he was bossed by the Leipzig midfield. 5.

Pierre Kunde – Made a crucial mistake when he gave away the ball prior to Leipzig’s third goal. Not effective for the rest of it. 3.75.

Edimilson Fernandes – Outclassed in the middle of the park by the home side’s midfielders. Couldn’t do much. 4.5.

Aarón Martín – He couldn’t stop Sabitzer in any way, but he grew into the game in terms of attack as it progressed. 5.

Jean-Paul Boëtius – Couldn’t do much in attack, and couldn’t contain Halstenberger. 3.25.

Karim Onisiwo – Largely uninvolved in the game, as he posed absolutely no threat to Leipzig. 3.

Robin Quaison – He tried his best to make things happen up front for Mainz, as he ran all over the pitch. But he was largely unassisted, and couldn’t do much. 5.5.

Danny Latza – Far better than his other compatriots in midfield, but despite that he couldn’t hold out against his opponents from Leipzig. 5.

Jean-Philippe Mateta – Really Mainz’s sole attacking threat after he came on. Tried to spark something but couldn’t get a consolation. 4.5

Team – Mainz were dominated in all sectors by a stunning Leipzig side. They have lots to improve on if they wish to avoid relegation. Their midfield in particular was nowhere near as good as their opponents. They need to imporve quickly before their relegation six-pointer against Union in midweek.

Péter Gulácsi – Was a spectator for most of the game. Made saves at the end when he had to. 7.5.

Lukas Klostermann – Solid at the back, as he didn’t let anyone slip past him. 7.

Dayot Upamecano – Didn’t make any mistakes in defence, and didn’t have much to do either. Good game for him. 7.

Marcel Halstenberg – Had a brilliant match at left-back. Boëtius was nowhere near him, as he forayed forward freely. 7.25.

Konrad Laimer – Did very well to get the assist for Werner. Was all over the right flank. Shame that he picked up that injury. 7.25.

Kevin Kampl – Was brilliant in midfield. Made lots of challenges and recovered possession multiple times for Mainz. Was absolutely amazing with his assist for Leipzig’s fourth goal. He was also an absolute factory for creating chances, and was all over the park throughout the match. Almost had a goal but it was ruled out for offside. 8.25.

Marcel Sabitzer – Ran the attacks for Leipzig. Got a brilliant assist for Poulsen, who reciprocated the favour, allowing him to make it three. 7.5.

Dani Olmo – Quiet in the initial stages, but he grew into the match. Always found pockets of space, and his passing was top-notch. 7.25.

Christopher Nkunku – Should have had at least one goal, but he was denied from no range by Müller, and then put an easy chance wide. His lack of composure showed when he blasted wide under pressure in front of a half-open goal. But, he played well though, as he was a constant threat. 7.

Yussuf Poulsen – Looked to have picked up an injury early on, but he was deemed fit to continue, and he certainly was, as he scored a towering header. He could have even had a second when he skied Werner’s cross. He also got an assist for his unselfish pass to Sabitzer for the third. Worked hard for the rest of the match, and set up Werner for his hat-trick thanks to his quick thinking. 8.25.

Timo Werner – Brilliant as always. Ended his goal drought and in style. First, with a cool finish early on. He dropped deep to help the midfield in the build-up play, and did that very well too. Worked extremely hard out of possession as well. Got a second with a tap-in as Kampl kindly set him up. Had lots of chances to complete his hat-trick, and eventually got it when Poulsen took a free-kick quickly and left him with an easy finish. 8.75.

Willi Orban – Great to see him back. Was solid in defence. 7.

Tyler Adams – Decent performance in midfield from the American. 6.5.

Ademola Lookman – Did very well in midfield after he came on. 6.25.

Team – We got to see a Leipzig side in full flow today. They were solid in all departments, defensively sound, commanding in midfield and clinical in attack. If they can keep playing like this, they might have a good shout as title contenders.

Leipzig go third in the Bundesliga table with this victory, and are 3 points away from runners-up Dortmund. They will take a lot of confidence away from this match after such an exuberant attacking display, after a less clinical showing against Freiburg. The Klassiker in midweek will surely help them get even closer to the top of the table.

Mainz, on the other hand, are only 4 points away from the relegation zone, and a win for Düsseldorf later today can see that gap close to one. They need results, and fast. But you couldn’t have expected them to do much against a Leipzig side brimming with confidence and in full flow. even then, a 5-0 thumping will be a dent to their confidence, but hopefully it will spur them on for the crucial match against Union in midweek.