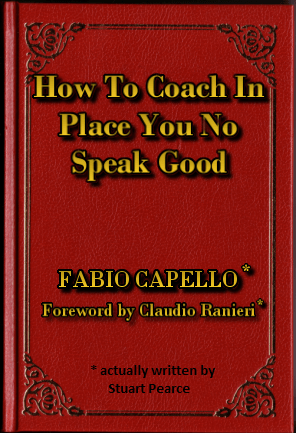 In what can only be described as a pamphlet rather than a book, eloquent and multilingual manager Fabio Capello has outlined how the average trophy-laden foreign coach can transfer their success to the English continent in just one hundred easy-to-master words.

The pamphlet, entitled How To Coach In Place You No Speak Good, was ghostwritten by his assistant Stuart Pearce, due to Fabio’s poor grasp of the English language. It outlines the most important phrases in a foreign manager’s repertoire in ten short and easy to digest chapters:

Pleasantries: “Hello”, “goodbye”, “yes”, “no”. Four words that should guide you through four months of press conferences whilst you get to grips with the indigenous people’s language.

Generic Phrases: Without simple commands like “go” and “stop”, “run” and “walk” and “move” and “there”, players would not be sufficiently pitch-trained, and would just do their own thing, running in circles and urinating on the astroturf. Reinforcing phrases like “faster”, “stronger”, “better” and “taller” will indeed make players play faster, stronger and better, but may not actually make players taller.

Attacking: Self-explanatory. The basics are covered, from “pass” and “cross” to the more elaborate “shoot” and “score”, with everything in between.

Defending: A little more pragmatic. The lexis is not as simple as when players have the ball, so suggestible words like “shirt”, “kick”, “tight” and “commit” can take on different meanings in conjunction with crazed facial expressions.

Abstract Terminology: Talking in abstract terms about a literal event can involve everyone in successes and distract everyone from failings. Phrases like “spirit” and “confidence”, popularised by foreign counterparts like Arsene, are integral when dealing with the media and falsely building up hope within your squad. Other words include “drive”, “passion” and “verve”. Use all in conjunction with the pronoun “we”.

Feelings: Whilst on the topic of interpersonal relationships, these words show that you are still human, despite talking like a badly programmed android. Stick to basic phrases like “good” and “bad”, “happy” and “sad”, “pleased” and “upset”. Some words are important, like “smelly” and “constipated”, but should not be used in the presence of the media.

Names: It is important to familiarise yourself with at least a few of the players. Talk lots about three or four players, then slowly learn the names of the others, and casually drop them into interviews so that it looks like you know them well. Journalists will like it if you refer to “Rio” and “Jack” on first name terms, but will equally acknowledge that calling players “Gerrard” and “Lampard” is often more respectful. Also, players will greatly appreciate being called something other than “hey you there”.

Locations: Directions are not necessarily important, as the relevant people will take you to where you need to go, but in order to do so, you will need to know the names of your desired destinations. For instance, knowing “England” is not enough: learn two or three city names, like “London” or “Manchester”. What’s more, learning how to say “Brighton” or “Soho” will open some doors in your personal and professional life.

Personal: Tell people you like things. It’s the best way to make friends and make the people of a country like you. Make sure you can say your favourite food in the native’s tongue (“spaghetti”, “steak”), clothing (“loafers”), film (“Robert De Niro”) and even music (“Jimi Hendrix”). Don’t bother learning words about the culture. You will not sample it, and if you do, you will not enjoy it.

Taboo Subjects: These phrases should not be used unless directly addressing the guilty player in your squad. In England specifically, it is important to learn the following words: “alcohol”, “prostitute”, “romp” and “steroids”. Do not, when questioned by journalists or Sheiks, mention words relating to personal controversies. Me personally, I cannot use the words “Bernstein”, “contract”, “scandal” or “nappyrash”, but it helps to learn the words regardless.

In total, Capello selects ninety-seven words which he believes are integral to coaching in England: the rest he ignorantly discards. According to Opta stats, the word Capello uses with the most frequency is “hey”, closely followed by “win” (mostly used in a pre-match context) and “sad” (prevalent in post-match interviews). The England manager stresses the need to use as few syllables as possible for ease of use and communication. The only words in his English coaching dictionary containing more than two syllables are “spaghetti”, “confidence”, “nappyrash”, “constipation” and “Manchester”.

The pamphlet is said to be in high demand amongst his counterparts. Early reports reveal that Christian Gross, Ruud Gullit and Ossie Ardiles have camped outside the FA’s headquarters at Wembley in order to obtain the first photocopied editions. FA administrative impresario Sir Trevor Brooking has banned Roberto Martinez, Carlo Ancelotti and Avram Grant from obtaining copies, hoping that it will prevent an influx of foreign coaches ruining the homegrown managerial credentials that the FA have worked hard to build up over the past ten years.

This article constitutes satire. Despite the use of real footballers and managers, the events discussed within the article are humorously fictional, and should not be taken deadly seriously.