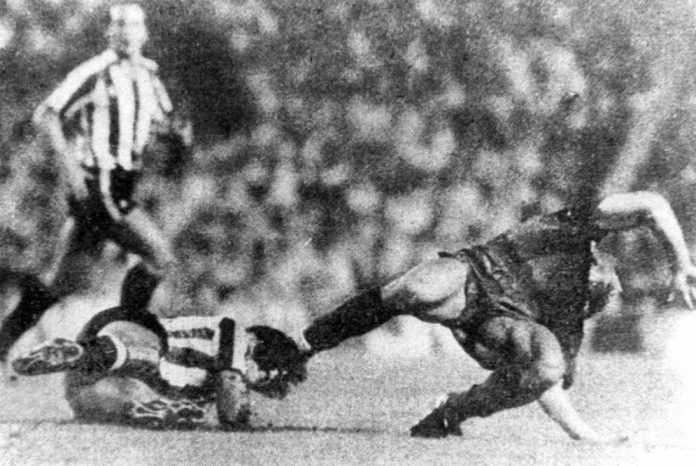 Diego Maradona moved to Barcelona in the summer of 1982 for a then world record fee of £5 million.

Despite contracting hepatitis during his first season, Maradona helped the club to a fourth place finish and a Copa del Rey title.

Obviously, expectations were high in his second season as the Argentinean superstar had a year under his belt playing in Spain. But that soon changed into despair when Javier Clemente’s Athletic Bilbao came to town to play at the Nou Camp in a league tie.

It happened on this day in 1983 , if you were wondering. Barcelona had had a poor start to the new La Liga season having lost two out of three games. But they started off the game superbly and took a healthy lead of 2-0 by half time.

But just 12 minutes into the second half, Maradona, on one of his trademark runs towards goal, was caught savagely from behind by Bilbao defender Andoni Goikoetxea. Even by his “no nonsense” standards, Goikoetxea’s tackle was brutal. This inspired British journalist Edward Owen to give him the nickname ‘The Butcher of Bilbao’, something that stuck with Goikoetxea throughout his career.

Barcelona manager and Maradona’s compatriot, the great Cesar Luis Menotti, in his post-match press conference described Goikoetxea as belonging to a “race of anti-footballers”. Menotti also called for a life ban but the Spanish football authorities thought that a ten-match ban would suffice.

Maradona, in tears, was stretchered off the pitch and spent three months in recovery. Barcelona won the game 4-0. It did not end there however.

The two sides met again in the Copa del Rey final in May, 1984 with Goikoetxea and Maradona both starting for their respective teams. Javier Clemente, before the game, had called Maradona “stupid and castrated” while also suggesting that the Argentinean had “no human qualities whatsoever”. Tensions were high, admittedly.

Bilbao won the game 1-0, but it all ended in a mass brawl on the pitch. Maradona, provoked by one of the opposition players, went on a rampage punching and kicking every Bilbao player he could get his hands on. As someone who never shies away from a good old brawl, Goikietxea entered the scene and landed a kick on Maradona’s chest. That resulted in yet another ban of seven games.

Keeping the theme strictly Catalan in today’s article, it is important to note that Barca’s iconic Camp Nou stadium was opened on this day in 1957.

Legia Warsaw were the visiting team in a friendly a Barca ran out 4-2 winners.

Barcelona’s original stadium, the Camp de Les Corts, had no room for further expansion. Therefore it was imperative to build a new ground to fit the club’s stature in world football. They did well in their new home in my opinion.