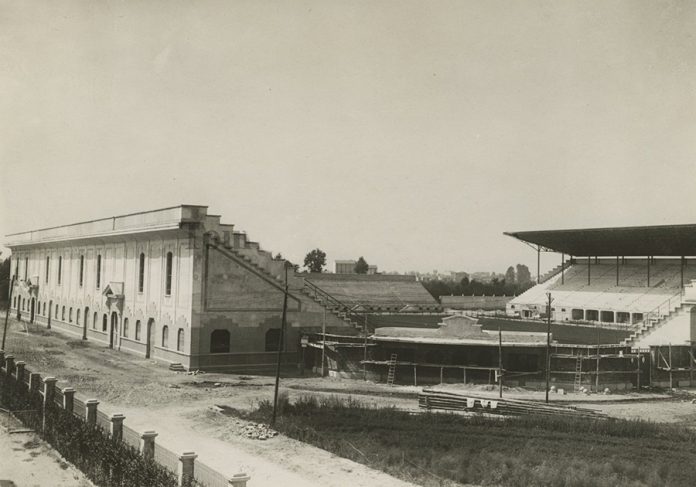 On this day in 1926, AC Milan and Inter Milan inaugurated the iconic San Siro stadium with a friendly game of football. The Nerazzurri thrashed Milan by 6-3!

The two clubs share the stadiums together now but originally, AC Milan were the sole tenants. Construction began in 1925 in the San Siro district of Milan, with a view to have a stadium specifically dedicated to football. Chief architects Ulisse Stacchini and Alberto Cugini rejected the idea of having athletic tracks around the pitch – a familiar feature in many classic Italian stadiums that were built from public funds.

The new home of football was named Nuovo Stadio Calcistico San Siro. 35,000 Fans had gathered to watch the two Milanese clubs fight each other.

Until 1947, Inter played their home games at the beautiful Arena Civica. The two clubs have been sharing the San Siro ever since. In 1980, the stadium was renamed as the Stadio Giuseppe Meazza. An Italian football legend and a two –time FIFA World Cup winner, Meazza played for both Inter and AC in the 1920s, ‘30s and ‘40s.

Robson takes charge of the Magpies

On this day in 1999, Newcastle United played their first game under Sir Bobby Robson.

The Magpies were bottom of the Premier League table with just one point taken from seven games. Sheffield Wednesday, who were second from bottom, came to St. James’ Park hoping to grab a point or three against a hapless Newcastle side. Instead, they got hammered 8-0 with Alan Shearer scoring five goals. What a start!

On this day in 1961, Uruguayan club Penarol won the Intercontinental Cup by beating Portuguese giants Benfica in a replay at the Estadio Centenario.

As the winners of the Copa Libertadores, Penarol took part in the Intercontinental Cup in its inaugural season in the previous year as well. But the Manyas lost to an all conquering Real Madrid side over two legs.

Penarol retained their Libertadores title in 1961 and returned to the competition to face Benfica who had the ever dangerous Eusebio in their ranks. They lost the first leg 1-0 in Lisbon but won the return leg in emphatic fashion by putting five goals past Benfica.

With aggregate scores not counting for much in those days, the winner was decided through a play-off which the Uruguayans won 2-1 thanks to a brace from Jose Sasia.