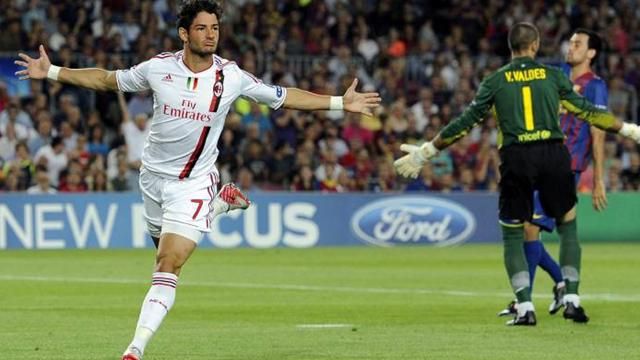 On this day in 2011, Alexandre Pato stunned the crowd at the Nou Camp by scoring inside 25 seconds in AC Milan’s UEFA Champions League group stage match against Barcelona.

The Brazilian received the ball just around the centre circle before getting past Javier Mascherano and Sergio Busquets with a sudden burst of pace. He then capped off an exquisite finish by putting the ball through Victor Valdes’ legs.

Pedro equalised for the Catalans in the 36th minute as the two sides went into the break on level terms. David Villa’s goal shortly after the restart put Barcelona ahead but Thiago Silva’s 92nd equaliser for Milan ended the game at 2-2.

The two European heavyweights met again in the quarterfinals with Barcelona coming on top and advancing to the semi-finals with a 3-1 aggregate win.

On this day in 2006, for 42 minutes, Arsenal played with a team that featured eleven different nationalities in a Champions League group stage match against Bundesliga side Hamburg.

The presence of Ivory Coast internationals Emanuel Eboue and Kolo Toure meant that Arsenal started the game with ten different nationalities. A thigh injury in the 28th minute forced Toure to come off and replaced by Justin Hoyte – the former England youth international.

The match ended 2-1 in favour of Arsenal.