Update: Buy your own pair of Nike RED Laces now

Didier Drogba and Joe Cole (Chelsea), Andrei Arshavin and Denilson (Arsenal), Marco Materazzi (Inter Milan), Lucas Neill (Everton) and Clint Dempsey and Seol Ki-Hyeon (Fulham) joined the U2 star Bono in London to announce the partnership between Nike and RED to fight against HIV/AIDS in Africa.

This partnership will result in delivering funds to support programs that offer education and medication on the ground and will harness the power of sport to engage youth around the world in the fight against AIDS in Africa. 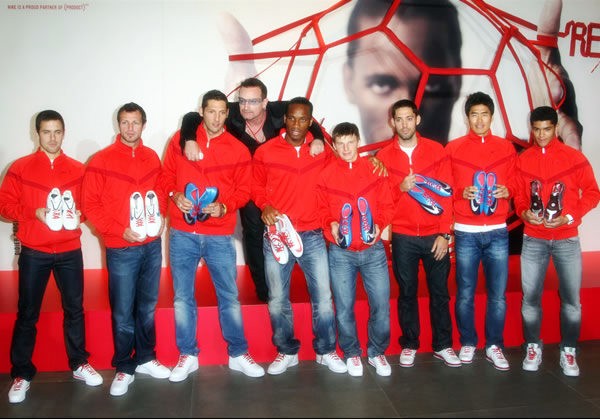 Mark Parker, president and CEO of Nike Inc., Susan Smith Ellis, CEO RED and Professor Michel D. Kazatchkine, executive director of the Global Fund to Fight AIDS, Tuberculosis and Malaria, were joined by footballers from around the world and U2 vocalist and RED co-founder Bono, to emphasize the worldwide need for action and participation to eliminate AIDS in Africa.

“The fight against AIDS in Africa needs great brands to drive awareness and engagement.”

“Nike is the right partner to connect education with sport, and in so doing help drive social change, prevention and understanding of HIV/AIDS. We are thrilled to have them with us.”

The concept is simple: it invites people to “Lace Up. Save Lives.” by purchasing a pair of Nike Product RED (TM) laces. One hundred percent profits will be equally divided between the Global Fund to Fight AIDS, Tuberclosis and Malaria and Nike football-based community initiatives that deliver education and understanding around HIV/AIDS prevention. These red laces will both medicate and educate.

Progress can be a slow process but fourteen countries have reported a decline in the prevalence of the disease. This is a great news and it tells us that the fight can be won! A lot of work needs to be done to achieve that. An estimated 3,800 men, women and children die in sub-Saharan Africa alone everyday. In addition to that, 6,000 new infections everyday among 15 to 24 year old men and women.

“The RED Nike laces can tie athletes around the world together with people living under threat from HIV in Africa in a beautiful way.”

“Wearing these RED laces is a sign that you care about others – and it helps us to protect and treat millions of people who every day risk infection or struggle with the effects of HIV.”

Dr. Tedros Adhanom Ghebreyesus, Minister of Health of Ethiopia and Chairman of the Board of Directors, The Global Fund added:

“RED has created a sustainable way to engage business in funding the fight against AIDS in Africa on a grand scale. Its partnerships not only deliver funds to buy medicine to keep people alive but also provides the leverage needed for us to demonstrate to the public sector that this partnership works and to garner additional support.”

“The addition of Nike to the RED initiative will only strengthen this impact as it will help us take this message to millions of football fans around the world and engage them in this issue through their passion for sport.”