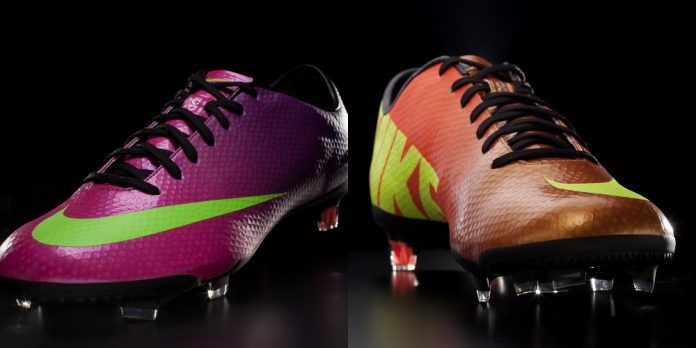 The Nike Mercurial Vapor IX is the next generation in Nike’s speed boots and comes with a dimpled upper for enhanced touch. All Conditions Control technology and a stud configuration designed to support rapid acceleration.

The boot is set to be launched in two colourways: Sunset for the younger players like Neymar, Sterling, El Shaarawy, Hazard, etc and fireberry for the more established players like C. Ronaldo, Ibrahimovic, etc.

The Mercurial Vapor IX is engineered to deliver a level of support and touch for players and allows a deadly combination of speed and skill when it matters most. The new Speed Control texture gives players the confidence to perform at speed with enhanced friction and a responsive fit.

Since the launch of the Mercurial series ten years ago, it has always stood out. Bold, exciting and designed in such a way that it does not just attracts players but gets them noticed as well. The Mercurial Vapor IX is no different.

‘Vapor Trail’ captures a passage of play from a pitch-level perspective that unfolds through a vortex of explosive speed. In its wake players, fans, security, ball boys and linesmen blown over. The cause of this relentless force is the Portugal captain Cristiano Ronaldo bursting out of the maelstrom with his Mercurial Vapor IX boots.

The Nike Mercurial Vapor IX will be available for pre-order on January 31st, 2013 at Nike.com and retailers worldwide