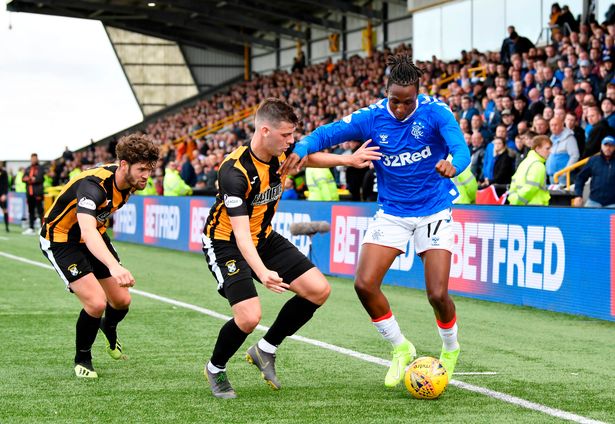 Rangers midfielder Joe Aribo played international football for the first time ever on Tuesday night, making his bow for the Super Eagles of Nigeria in a friendly against Ukraine.

The 23-year-old London-born Gers man was handed a start by manager Gernot Rohr with Leicester City’s Wilfried Ndidi missing due to injury, and Aribo definitely proved his quality.

The Rangers midfielder scored four minutes into the game that eventually finished 2-2 and he took charge of proceedings in the middle of the park.

The West African giants are looking to rebuild their team after the likes of John Mikel Obi and Odion Ighalo hung the boots after the African Cup of Nations, and Nigerians reckon they have found the next best thing in midfield in Aribo.

Here is how some of them reacted to his performance against the Ukrainians on Twitter:

In Joe Aribo, Nigeria has finally found that No.10 replacement for Okocha. What we thought we had in Mikel. His b2b runs are tremendous. A new star is born!#UKRNGA #UKRNIG pic.twitter.com/WdAfqHg4RR

That number 10 jersey looks good on you, Aribo.

The first half of the game against Ukraine was superb for the super eagles..the 2nd half for me was nothing to write home about..Uzoho , Aribo and etebo were quite impressive though. glad to also see some of the new young stars in action @olywal

I like Aribo, if you listened to the show when we talked about the list I highlighted he is decent. Uzoho had a good evening too, can't fault him for the goals conceded really. https://t.co/Ded5g0GSmH

@olywal Hi Wale.Great game with so many positives.Chukwueze needs 2 work on his final ball and be less selfish,same goes 4 Samuel Kalu.Joe Aribo is one sure midfielder we aven't had 4 so long,Osimhen has proved to Rohr he can be our new no9,Not a fan of Uzoho but he impressed me

@Brilafm889#onitsha. Joe Aribo is the missing link we are looking for, his ability to carry the ball from deep even under pressure and beat the man pressing him to create space for himself is the reason for the quick transitions which was missing in afcon.

The way new faces breaks through the ranks of Super Eagles portends great future for our game if they sink in like https://t.co/rCUZe7bcVC kid on the block, Aribo, box to box midfielder, will come good for team.Well done Rohr!

Aribo joined Rangers on a free from Charlton Athletic during the summer, and he has already established himself as a key player under Steven Gerrard, featuring in 12 appearances across all competitions for the Scottish Premiership giants thus far.

He has shown he has what it takes to become the best in his position in Scotland, and it will be interesting to see how he fares going forward.

Rangers fans will hope Aribo can help them beat Celtic to the title this term, and Nigerians will surely be more attracted to the league now because of him.