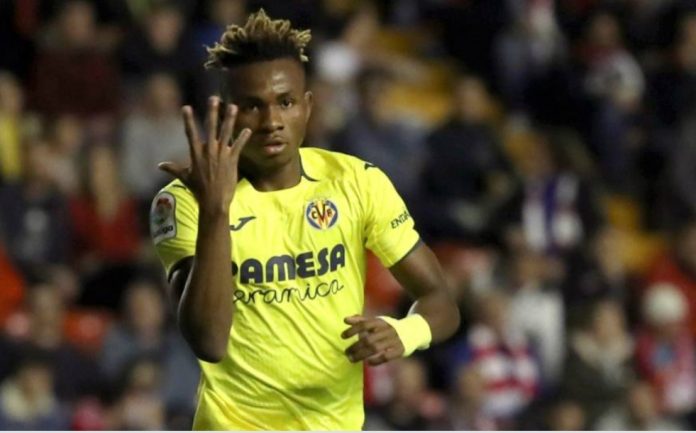 Villareal youngster Samuel Chukwueze is on the radar of Leicester City and Arsenal, according to reports in Nigeria.

Football live.ng claim the 19-year-old has drawn attention from Premier League clubs, with a January move a possibility.

Chukwueze arrived in Spain last year to take his place in Villareal’s youth set-up. He progressed through to the B-team, appearing in Segunda Division B (level three of Spanish football).

This season the Nigerian has broken into the La Liga clubs first-team, making 22-appearances, scoring six goals, and adding a further two assists.

The winger was part of Nigeria’s world cup under-17 victory in 2015. Recently, he earned his first full international cap in a goalless draw with Uganda.

Chukwueze has a wonderful left foot. He is also known for his electric pace, and dribbling ability. Comparisons to Bayern Munich star, Arjen Robben, are not far off the mark.

“Only 19 and at La Liga side Villarreal, Chukwueze is an attacking midfielder who can play in both wide areas and his dribbling ability is unbelievable.

“He has already scored in the league and cup and you have a player who is new and exciting to watch.”

Furthermore, one stumbling block facing his suitors, is Villareal boss Luis Garcia. Footballlive.ng quote the 46-year-old, who only took over the reins at the Estádio de la Cerámica a few weeks, as being impressed by the youngsters ability.

“I was told about Chukwueze. He’s got speed, spark, he can dribble. He’s a jewel we have to take care of.”

The Guardian claimed Arsene Wenger was confident of signing him in January 2016. Ultimately the Nigerian opted to move to La Liga.