Although, Chelsea can take few positives from the match, which I shall discuss as we move on, but the 2-2 score reflects a lot of work still needs to done behind the scene.

Mourinho usually comes up with some-kind-of-excuses whenever his side performs badly. At least for once, he spoke the truth.

Yes, it was that poor.

I think most of you will agree with me:

Newcastle were up to the challenge, and they played really well in the first half with great passion and extra intensity, but Chelsea were equally poor.

The midfield was brutally exposed, and the front three along with Loic Remy, couldn’t manage a single clear cut attempt on goal in the opening 45 minutes.

Mourinho, who usually is protective of his own players, said after the match:

José Mourinho: “In the first half, if you were to rate our performance from zero to ten…minus one. It was really bad in every aspect.”

Finally a true assessment from the Chelsea boss. Lion share of the blame goes to the players, and partly it goes to the manager as well. That takes me to point #2

2. Lack of Width – Chelsea too predictable?

Mourinho likes using the 4-2-3-1 formation. It has earned him huge success over the years but may be he should tweak the system a bit.

To be fair, a system can only function smoothly, if the individuals step up to the plate. Over to #3, defence:

In the first half, Mitrovic played a lovely back heel pass to Perez, whose first time effort went straight into the hands of Begovic.

I don’t have that replay with me, but I can tell you, in that build up to the attack, two Chelsea defenders went for the same ball in the box – Zouma and Ivanovic – and they almost collided. It shows there is a clear lack of communication and organisation at the back.

Second, Wijnaldum’s header in the second half.

Mourinho, I’m sure, will be furious with Fabregas, when he sees the replay again. The Spaniard was marking Wijnaldum and then at the time of delivery the Dutch player simply evades him with ease.

These are basic stuff, and at best can be described as a “school boy error”.

We can put the blame on the defence, in fact #5 is all about that, but it still needs to be put away. Step up, Ayoze Perez.

His first touch in controlling the ball was emphatic and then rifled the volley in, the ball kissing the left-hand post. It’s a belting finish.

Check the goal again, in case you missed it.

Ayoze Perez gives us a 1-0 lead against Chelsea. pic.twitter.com/6GYjn1eIxf

5. Frankly, This guy needs to be dropped

Without taking any credit away from Perez, what was Chelsea defenders thinking when they saw a cross was coming in from the right flank?

Zouma decided to leave it for Ivanovic (First big mistake) who was so slow to react that Perez turned and volleyed and yet the Serbian still couldn’t get close to him. 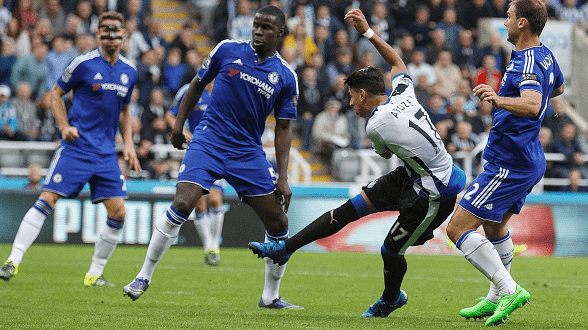 Apart from his regular mistakes at the back, equally annoying was his delivery from the wings.

Some of his crosses were so mis-directed that it fell in no-man’s land. It’s a tricky situation for Chelsea. On the basis of performance, Ivanovic should not be anywhere near the starting XI, but what options do Chelsea have?

Quite surprisingly, Newcastle went into defensive mode after the break.

While Chelsea tried to be aggressive, the Magpies were happy to sit back and rely on counter attacks. Had Newcastle been more adventurous, especially after taking 2-0 lead, the result could have been different.

Mourinho in a way was forced to make those changes. He wanted more attacking players on the pitch in order to salvage a point.

In the end it took two very good individual efforts to avoid another defeat.

Ok, I will let the stats do the talking here.

Ramires scored a sensational ‘golazo’ to give Chelsea the hope of getting something out from this match.

His movement deceived Krul for Willian’s goal, and could have got his second goal of the night, but for krul to save his header.

With this goal he has now scored in consecutive apps for Chelsea for the first time since October 2012 (both games v Manchester United), via Whoscored.

The Brazilian is usually known for his industry more than craft and guile, and scoring goals. In fact, he doesn’t score many.

Earlier this season, he scored a similar type of goal, when none of the players got a touch from his free kick. A freakish goal.

William and Ramires changed the complexion of the match. It’s not just about goals, Chelsea as a team looked much better when they came on.

9. McClaren’s negative tactics towards the end

I was really surprised to see Steve McClaren’s dull and negative tactics as the game approached its end.

Already touched upon his defensive strategy, what left me amused was his constant message given to players to kill the time.

He panicked. He probably had felt that Newcastle might lose the game. The way he was pointing towards Sissoko to take slow steps when being subbed, and later instructed players to waste time on the corners, is largely frustrating.

The reason being, it was from one of those corners Newcastle earlier scored, so why not try again and attempt to get full three points. These minor incidents only highlight why Newcastle are yet to pick up a win in the 2015-16 Premier League.

10. Strike force is a major worry for Chelsea

In absence of Costa, it was a wonderful opportunity for Remy and Falcao to impress Mourinho by putting up a strong performance.

Remy disappointed, though he din’t get supply from fellow team mates as well. And less about Falcao, better it is.

The Colombian got 30 minutes to make an impact. To be fair, it is a relatively sufficient time to prove a point or two.

From that perspective, Falcao had enough time to make a solid impact in the game. His stats: Zero shot. Zero attempt on target. Zero dribble.

The Belgian has created 26 chances this season, but still it feels like he is having a relatively poor season.

Why? Lack of goals? Giving the impression of being lethargic?

Hazard has now failed to score in each of his last 10 league games. His last goal came in May against Crystal Palace. (Click to Tweet)

Check some of the reactions from the Chelsea fans:

Hazard and Pedro have to step up. Ramires did more in 15 mins than both in 90 mins.

12. What does the Result mean to both the teams?

The league table does not lie. Newcastle are still languishing in the relegation zone with only 3 points from seven games. McClaren badly needs point, and that too quickly.

Chelsea were top of the table, exactly one year ago from today; now, the Blues are in 15th place with eight points on board.

On a day, when Manchester City lost to Tottenham, and other potential challengers have picked up full points, Chelsea lost a golden opportunity to move up the ladder.

At the start of the season, Mourinho said individually and collectively Chelsea must improve. Really, they haven’t.

I can’t remember a single goal which can be put down as a goal keeping gaffe, which can only prove two things:

first, the players are badly under performing…

It’s up to Mourinho to fix it. Next up, Porto in the Champions League!