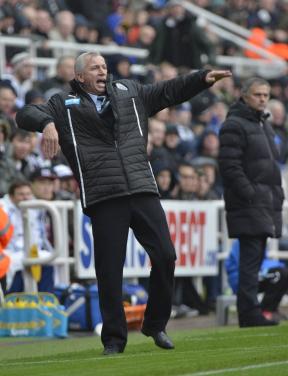 Chelsea fell to their first defeat of the season as a Papiss Cisse brace saw ten-man Newcastle United run out 2-1 winners against Jose Mourinho’s men. Didier Drogba pulled one back late on and set up a grand-stand finish, but Newcastle were able to hold on for a famous win.

With Nemanja Matic suspended, John Obi Mikel started in the pivot alongside Cesc Fabregas. There was a lot of apprehension among some Chelsea fans even before the match began, as the following tweet shows:

This loss sees the Blues’ winless run at St. James’ Park under Mourinho continue, but it also means that Manchester City can cut the gap to three points with a win over Everton at home tonight.

In a game that saw the momentum swing back and forth throughout, Chelsea paid the price for not putting away their chances as the Magpies scored both their goals seconds after the Blues missed golden opportunities of their own. The away side started brightly, with Willian going extremely close on two occasions from distance in the opening 20 minutes.

Newcastle got back into the game from there on in, but neither side was able to create any chance of note in the opening half. Alan Pardew had a substitution forced upon him at the break, with first choice goalkeeper Rob Elliott limping off injured and 21 year-old Jan Alnwick coming on for his debut.

In the 57th minute, John Obi Mikel had a fantastic chance to open the scoring, but mistimed a free header from 6 yards from Cesc Fabregas’ free-kick. To add salt to his wounds, Newcastle scored rightaway. Sammy Ameobi’s cross from the left was not cleared by Gary Cahill and substitute Cisse had the simple task of tapping in from 2 yards.

This was the first time this Premier League season that Chelsea had been trailing in the second half, and it had the alarm bells ringing all over the footballing world.

Mourinho made an immediate change, bringing on Filipe Luis and Didier Drogba for Cesar Azpilicueta and Willian respectively. While making them stronger in an attacking sense, it left them vulnerable to the counter-attack.

After an array of incessant pressure, Eden Hazard hit the post. Once again, Newcastle punished Chelsea straightaway. Moussa Sissoko went through, but his mistimed shot fell to the feet of Cisse, who finished with aplomb into an empty net.

The game seemed done and dusted, but Steven Taylor was then sent off for recklessly fouling Andre Schurrle. From the ensuing free-kick, Drogba headed in to halve the deficit and set up a possible comeback. Despite putting endless balls into the Newcastle box late on though, Chelsea were unable to score an equaliser. The closest they came was when Costa’s left-footed shot from the edge of the box was brilliantly tipped over by Alnwick.

The reaction on Twitter following the game was interesting from the Chelsea fans. While some took a positive outlook, saying that the unbeaten streak ending was a distraction that was out of the way. There were others though, who called for a change in the team selection.