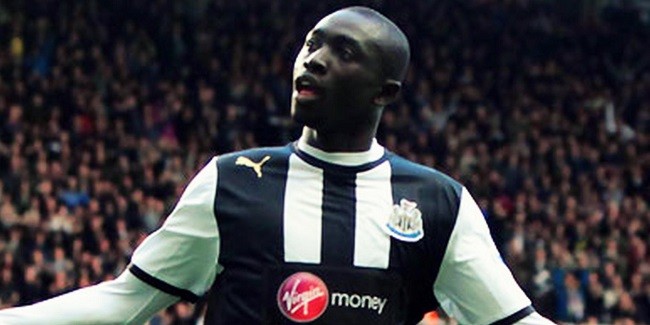 Papiss Cisse has rocked Newcastle United by pulling out of their pre-season friendly tour to Portugal. He told the club he is unwilling to wear the sponsor and in turn promote the money lending firm, Wonga due to his religious beliefs.

Newcastle will be wary of the situation and this will have no doubt alerted a number of clubs to the availability of the Toon striker. The Senegalese front man scored 13 goals in 14 appearances in his first season at St James Park, after joining in January 2012 from Bundesliga side SC Freiburg.

Goals dried up the following season, however, their is no doubt that he is an important asset to the club and they will be looking to resolve the problem as quickly as possible.

It has been reported that Cisse did tell Newcastle staff that he would go to Portugal, where they are due to play two friendlies, if he could wear an unbranded shirt or one with emblazoned with a charity logo. This request Newcastle have presumably denied.

There have been a number of talks in the last weeks to try and resolve the issue, but no breakthrough has been reached. Fellow Muslim teammates, Moussa Sissoko and Cheick Tiote, have no problem regarding wearing the pay-day loan companies logo on their shirts. This would possibly make it harder for Newcastle chiefs to understand his point of view.

Former Tottenham striker, Freddy Kanoute, whilst playing for Sevilla refused to wear a shirt promoting the gambling website 888.com. An agreement was made that Kanoute could wear an unbranded shirt. Using this precedent, I’m sure Newcastle and Cisse will believe that an agreement can be reached, however it seems that both the club and the player are standing firm.

It is only really conceivable that Newcastle will accede to Cisse’s request to wear an unbranded if they have any hope at all in keeping him this year.

Papiss Cisse’s chief concern with the pay-day company, Wonga, is that their business dealings have been widely criticised for being too harsh and praying on the misfortune of the neediest families. Their 4214% APR has come under particular scrutiny and has been criticised for being extortionate and making money from the poorest in society. The stance from Cisse is a sincere and admirable one and should garner support from Muslims and non-Muslims alike.

Several clubs will be put on alert by this rift as to the availability of the star striker. I’m sure clubs like Tottenham, Everton, Sunderland and Fulham will all be paying attention in the next couple of weeks as this story unfolds. There is still a lot of unresolved questions involving Papiss Cisse and it will be interesting to see what Newcastle do next as they try and keep their star man at St James Park.