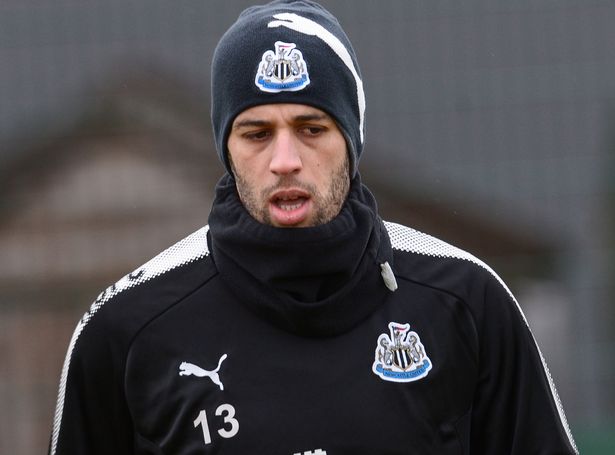 Ahead of Newcastle United’s crucial Premier League clash against Bournemouth on Saturday, Rafael Benitez has confirmed that January signing Islam Slimani has suffered another injury set back.

The 29-year-old joined the Magpies in the January transfer window on loan, and he is yet to make an appearance for the Tyneside club.

Now Benitez has confirmed that he will be without the Algerian international for the journey to the south coast. The Spaniard added that he will be out for at least a couple of weeks, and that he arrived at the club carrying an injury already.

“Almost everybody is available apart from Jesus Gamez, and Slimani had a set-back the other day, so he will not be available,” said Benitez, as quoted by the Chronicle.

“It will at least be a couple of weeks, we have to be careful with him because he had a problem when he arrived. We knew he was carrying a small injury, he’d had little problems but in the last day he had to stop and check again.”

Slimani returned to his home country for extra training but it seems he won’t be available until the home clash against Southampton.

Newcastle fans have vented their frustration on social networking site Twitter, with many putting the blame on the management for signing an injured player.

What has been more frustrating is that Aleksandar Mitrovic has been sent on loan without being given a fair chance this season. On top of that, the club took a gamble on an injured player.

might as well send him back to Leicester, save a few quid.

Tbh club get what it deserves. We are tight af. We loan an injured Slimani on deadline day. These are the kinda things that will happen lmao.

send him back to leicester and recall mitro from fulham. if gayle or joselu get crocked we fooked.

Thought we had dodged a bullet with Sturridge, but we just have ended up the same situation with Slimani. The club is cursed I’m sure ?

That’s how the club run transfer activity in Ashley era. Drag to deadline day and we all know it’s bad for team

What was the point in signing the bloke then? Surely we could’ve got a player who could of been fit to play? Joke of a club strikes again #nufc

Brilliant, just brilliant. And we laughed at Sturridge? At least he made it onto the pitch, just.. #nufc

What a joke and waste of time