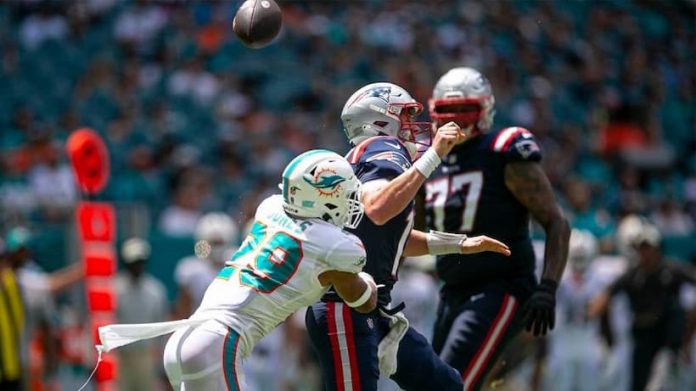 New England Patriots QB, Mac Jones, will have an MRI scan on an ankle injury that he suffered during their loss to the Ravens.

ESPN’s Adam Schefter explained how the Patriots will send Jones for an MRI scan. The injury is only believed to be a high ankle strain, something that will bring relief to the Patriots fans.

Patriots’ QB Mac Jones is believed to have suffered a high-ankle sprain during today’s loss to the Baltimore Ravens, per source. He will undergo an MRI on Monday to confirm the diagnosis and determine the severity of the injury.

The injury occurred late on in the fourth quarter, with the Patriots behind in Baltimore.

He was hit by Ravens defensive lineman Calais Campbell and grabbed for his left ankle while on the floor. It appeared that Campbell had landed on Jones’ leg while it was bent at an awkward angle.

Jones limped off the field and straight down the tunnel, a site that concerned fans. However, initial tests showed that it wasn’t a season ending injury.

Bill Belichick was reluctant to give too much information on the injury:

“Until we get more information, I’m not going to speculate wildly on what it would or wouldn’t be.”

What Have Other Patriots Players Said About Jones’ Injury?

“I know if he has something he can go and play with, he’s going to play with it,

“We’ll have to see what it is and go from there as a team. We’ll continue to rally around him.”

The Patriots fans and team now face a waiting game to find out if Jones will be fit to face the Green Bay Packers on Sunday.