And lo, here we are.

The culmination of a month of toil, jubilation and heartbreak is set to come to a showpiece head in the magnificent surroundings of Soccer City in Joburg on Sunday, as both the Netherlands and Spain will compete to be crowned world champions.

One certainty that lies in store is that there will be a new name engraved on the World Cup trophy come Sunday evening, as both countries – despite their continued prominence in world football – have never lifted that 6 kilograms of 18 carat gold before – despite their rich histories.

Watch the Final of the 2010 World Cup between Netherlands and Spain live online. Click here to sign up.

Another surprising statistic is that neither side have ever met in major international tournament football before, so there is no tangible previous form to draw conclusions from – leaving us with a very unique prospect on our hands. 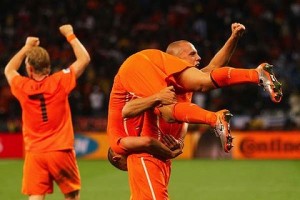 Bert Van Marwijk‘s men were faced with the unenviable task of having to make their way past perennial underdogs Uruguay in the semi-finals, and eventually did so at a relative canter after a barren opening period.

After taking a breath-taking lead through Giovanni Van Bronckhorst‘s superb angled drive, the Dutch (as we’ve seen throughout their World Cup campaign) once again laboured to capitalise on their advantage – looking decidedly short on ideas in the process.

The Netherlands’ struggled to come up with anything convincing in their bid to put Uruguay to the sword, and La Celeste duly pulled themselves back into the tie when Diego Forlan‘s 25-yard effort ‘knuckled’ it’s way past Maarten Stekelenburg with just five minutes of the first-half remaining.

Although they had been markedly better in the early stages of the second-half, Van Marwijk’s men were still struggling to make in-roads through the staunch Uruguayan defense, that was until the increasingly stagnant flow of the game was altered tellingly in the 70th minute.

Just as during their 2-1 quarter-final victory over Brazil, the Dutch had to wait to be spurred into action by a timely piece of serendipity – and again it was their midfield talisman Wesley Sneijder that benefited.

After looking up to see his route to goal littered with sky blue shirts, the Inter Milan star fired off a speculative effort that was heavily deflected twice and just managed to evade the touch of the offside Robin Van Persie before nestling tamely in the far corner of Fernando Muslera‘s net.

With the game now swung in their favour, the Dutch regained possession almost immediately after the restart and pushed in search of a third goal to effectively neuter Uruguay’s latent threat.

Uruguay resolved to notch a well-worked 92nd minute consolation goal through midfielder Maxi Pereira, but it was a case of too-little-too-late for Oscar Tabarez‘s side – who were forced to watch on as the pulsating hordes of Oranje-clad supporters celebrated at the final whistle. 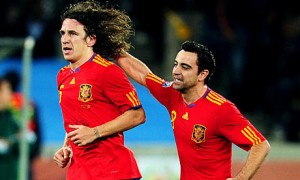 Spain, who are incidentally vying to become only the third team in history to hold both the European and World champions title at the same time (after West Germany in ’72 and ’74 and France in ’98 and ’00), come into the final off the back of an (almost) exemplary run of results – but not necessarily on a high.

Their intrinsic predilection to score ‘the perfect goal’ every time has been more of a burden than a boon to Vicente Del Bosque‘s side, as they have time-and-time again monopolised the possession statistics without ending games with much to show their dominance – but, when you have David Villa at your disposal, it rarely tends to matter.

The prolific striker has already netted five goals at this World Cup (tying at the top of the goal-scoring chart with the somewhat fortuitous Sneijder) and has repeatedly proved to be the difference between his side and their opponents by virtue of a series of crucial strikes – a run you’d expect that he is eager to keep going.

It was Germany that stood before them in the semi-finals, but La Furia Roja eased past Joachim Loew’s resurgent young team by registering a deceptively narrow 1-0 victory (thanks to a powerful Carles Puyol header) over Die Mannschaft after again dominating the proceedings with their self-indulgent passing display. 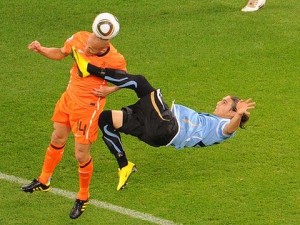 The Netherlands will be without Demy De Zueew (suspected broken jaw) for the final, but seeing as though he was only brought in as a replacement for the temporarily suspended Nigel De Jong, that shouldn’t be much of an issue.

Highly-rated right-back Gregory Van der Wiel will also be returning after serving a one-match ban, meaning that Khalid Boulahrouz will be demoted back down to the bench.

Vicente Del Bosque will face a tough decision on the fitness of Fernando Torres, after the Liverpool striker again looked leggy despite only coming on for the last ten minutes of the Germany game.

Torres’ replacement in the first string, Pedro, did his chances of securing a starting berth in the final no harm after putting in a lively shift but some late-stage wastefulness may be enough to persuade Del Bosque to go with a more experienced option. 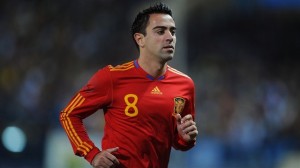 This upcoming final should be (on paper, at least) a delight for all connoisseurs of football the way it should be played, but if this South African World Cup has taught us one thing and one thing alone, it is to expect the unexpected.

With so much riding on the game for both countries, I predict a cagey affair. If neither team manages an early goal, then we could be in for a pretty drawn-out encounter.

A single goal may be enough to swing it either way, but with so much attacking talent on display, it shouldn’t be too optimistic to hope for an entertaining game for the millions and millions of neutrals tuning in worldwide.

Spain rose to the occasion when they needed to in the semifinal after a shaky start to their campaign followed by mediocre results against mediocre teams. With the immense talent in the squad they are still the favorites with the bookies but the Dutch can overturn the tide and grab their first ever World Cup trophy at 14/5. Click here to bet on this and other World Cup games.

You can watch Netherlands take on Spain live online as well as all other World Cup matches, plus hundreds of football games from around the world. Read our live World Cup football page for more details.