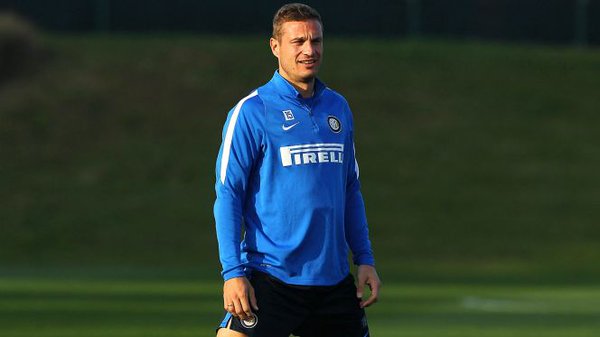 The club issued a statement stating the decision was one of mutual consent.

Vidic told Inter’s official website: “Thanks to all the Nerazzurro family and to the Inter fans. I wish the club all the best for the future. Forza Inter!”

Vidic enjoyed a lengthy and successful career with Manchester United, before joining Inter in 2014.

During his later years at United, his contribution to the team was limited by recurrent injury problems, and the same continued in Italy as well.

The Serbian hasn’t played a single match this season after undergoing a hip surgery.

The 34-year-old has now entered the market as a free agent at a time when several top clubs are actively looking to bolster their defence.

Vidic, known for his tough tackling and ariel prowess, won five Premier League titles and a Champions League trophy with United between 2006 and 2014.

His performance gradually declined in his final years at Old Trafford, leading to his departure.

He joined Inter in the hope of prolonging his career in Serie A where the defenders are required to rely on experience and patient approach rather than robust athleticism.

Many United fans discussed the option on bringing Vidic, a fan favourite, back at Old Trafford on a short-term basis on social media.

At 34, Vidic still has a good amount of football left in him, provided he stays fit and regains his best form after the surgery.

He is still good enough for many Premier League clubs, but a move to United is highly unlikely.

The MLS is a likely destination for him provided he can stay fit, although the American league is more physical and the game faster than what most players exist, as Gerrard and Lampard have spoken about since moving from the Premier League to the US in recent years.