Manchester Evening News have listed five players who could play their last game for at Old Trafford, when Manchester United face Arsenal in the Premier League on Sunday.

Elsewhere in Europe, Manchester United winger Nani is also likely to play his last game for his boyhood club Sporting.

The Portugal club will face Braga this weekend, and A Bola reports it could be his last game in Portugal, before he packs his bag to rejoin Manchester United. 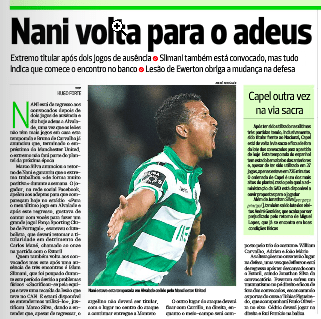 Nani joined Sporting on a season long loan this season as a part of the deal that saw Manchester United signing Marcos Rojo from the Portuguese club.

The 28-year-old has enjoyed a great season at Sporting and he hopes to replicate the form with Manchester United next season.

United boss Louis van Gaal should be impressed with how Nani performed during his loan period but doubts remain whether the Portugal international will feature in the long term plan of his manager.

Will Nani get a chance to impress Van Gaal? Highly unlikely. His market value is certainly going to rise following a brilliant campaign in Portugal and United could be looking to make a good profit from sale, should they manage to sell him to the highest bidder in the summer.