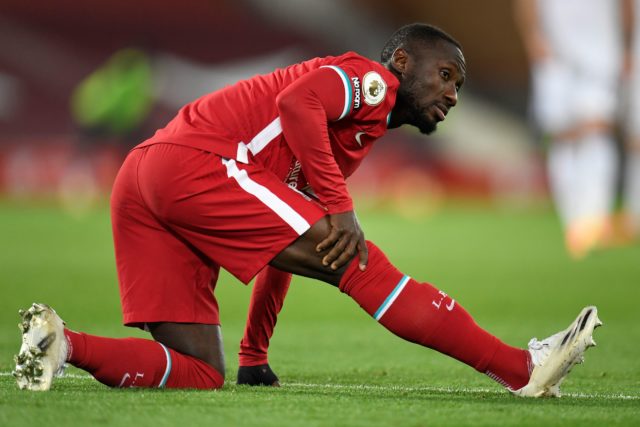 Liverpool midfielder Naby Keita has returned to full training ahead of the Premier League sides Champions League clash against Porto.

The Guinean midfielder picked up an ankle injury against Crystal Palace and he was sidelined for the 3-3 draw against Brentford at the weekend.

Jurgen Klopp is already without the services of Thiago Alcantara and Harvey Elliott in the midfield and the return of Keita could not have been better timed.

No Thiago Alcantara (calf) and Harvey Elliott (ankle) [but] the rest are available which includes Naby Keita who has been pictured on the training pitches. "There are no new concerns at the moment. A big squad will travel [to Porto]." #LFC

It remains to be seen whether the German manager is willing to risk the 26-year-old midfielder as a starter for tomorrow’s game.

The likes of Jordan Henderson, Curtis Jones and Fabinho started the weekend clash against Brentford and the Reds could look to rotate their midfield options for the midweek game.

Liverpool captain Jordan Henderson has struggled with injuries in recent seasons and starting Keita instead of him would be ideal. Henderson is better suited to playing once a week, given his injury history.

The return of Keita will not only add more depth to Liverpool’s midfield, but it would also add a new dimension to their style of play.

The 26-year-old will add creativity and defensive cover to the side. Furthermore, Liverpool could use his intelligence and flair in the absence of Thiago.

Keita is adept at passing between the lines and breaking down deep defences and the Reds needed someone with his skill set against Brentford.

The former RB Leipzig midfielder has been really unlucky with injuries since his move to Liverpool and he will be hoping to get over his fitness concerns and play regularly in the coming months.

Liverpool picked up a 3-2 win over AC Milan in their Champions League opener and they will be looking to pull further clear at the top of their group with another win this week.

Porto have a talented squad at their disposal but the Reds have enough quality to grind out a vital away win here.