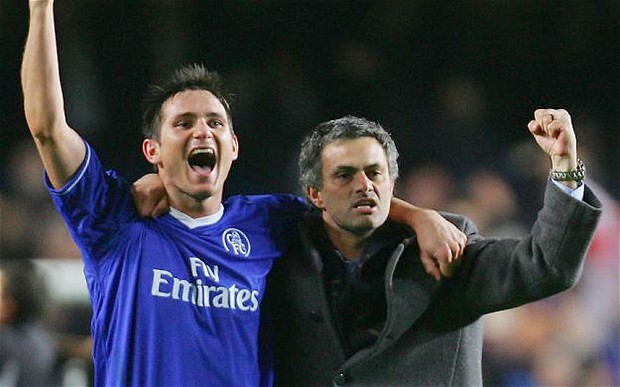 Jose Mourinho, the Chelsea manager has paid highest tribute to club legend Frank Lampard, saying he was the best midfielder in his role for nearly a decade.

The 35-year-old England midfielder is arguably the best midfielder ever in the history of Chelsea football club. Lampard, who has the distinction of scoring most goals in Chelsea’s history, has announced to leave the club, after his contract expired.

Mourinho admits that the parting was painful and difficult yet he could find solace with the fact that Lampard, whom he claims as “one of the most important players in the history of Chelsea”, can return back at the Bridge in any way as possible and at any time.

“He can be a coach, he can start in the Academy, he can start being my assistant at the same time he is doing the badges because he can do all the badges.  He can decide in this moment, I don’t want to start immediately in a coaching role, he wants another role, wants to be an ambassador, wants to work hand to hand with the CEO representing the club in important places of our life.  He can do what he wants so he has to be back.”

Lampard has been an epitome of consistency per excellence for Chelsea for the last 10-12 years. Probably no other midfielder (probably Steven Gerrard) in this country has been this consistent, and Mourinho has rightly paid tribute by claiming the former West Ham midfielder has been the best midfielder in the no 8 position.

“And Frank Lampard, I don’t know if there is an English word, pradigma.  He is six, he is a ten, he is an eight because he is the six and the ten and becomes the eight and the eight for me is the best eight I manage for sure.”

“I don’t see a better eight than him in the last decade, not just the best I had, I don’t see a better one because at the end of the day football, the only thing that is objective in football is the numbers because the other things, again depends on opinions.”

Mourinho has wished him all the success for his new venture and wants him to finish his career after the World Cup. Lampard, who has played 110 times for England national team is an integral part of Roy Hodgson’s squad for the World Cup in Brazil.