Chelsea boss Jose Mourinho has refused to discuss the relationship between him and Andre Villas-Boas in the public, but suggested that he doesn’t care and certainly least interested to what the Spurs manager has to say. 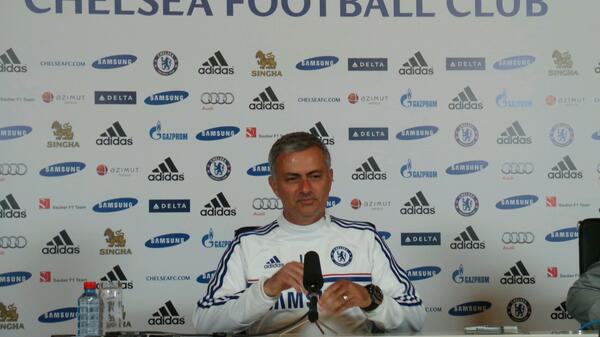 Villas-Boas claimed earlier that although Mourinho holds a special place in his career but he doesn’t keep any contact with him anymore.

The Portuguese started his career under the tutelage of Mourinho during the Special One’s time at Porto, Chelsea and Inter Milan but the pair now shares a frosty relationship between them.

Ahead of Chelsea’s trip to Tottenham this weekend at the White Hart Lane, Mourinho said as quoted in the Sky Sports:

“I don’t discuss this with the media. it’s a personal thing. I don’t care what he says. I’m not here to do that. I’m not interested.

“I managed a Champions League final against a manager who was important in my career and taught me to grow up and I did it in a professional way. And that is a way you have to do it.

“I have had so many assistants in my career. I was always an open book to them and with the coaches in the academy. Will I go for a glass of wine with him? When people invite me I always go. I never refuse.

“But I have nothing more to say on this.”

Mourinho has confirmed that Ramires is still in the squad but said the Brazilian midfielder hasn’t trained and therefore is doubtful for the tie against Spurs.

However, Mourinho has considered Spurs as a potential title challenger this season as says he likes playing against them, because of the big rivalry between the two clubs.