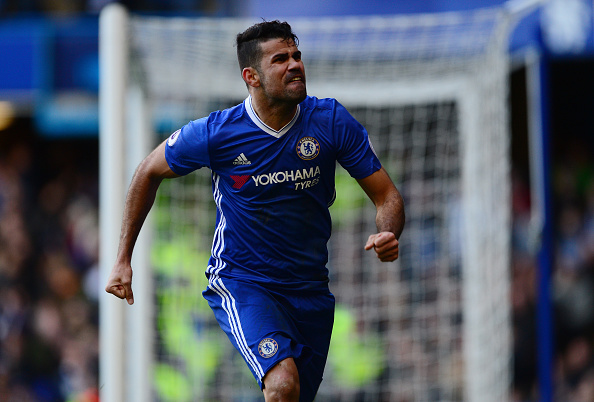 In our previous Most Valuable Offensive Players (MVOP) ranking article, we explained how Arsenal transferred Alexis Sánchez from La Liga two seasons ago to boost its attack. In that same transfer period, Chelsea also transferred a player from La Liga for the very same reasons. That player, Diego Costa, is now leading the MVOP rankings.

After having a tremendous first season at Chelsea, Diego Costa had a sub-par performance last year. He seems determined to bury the sour taste last season left. Costa has already equalized his goal tally of 12 from last season, and he is currently tied for first place in the EPL for goals scored.

His 12.68 points earned for Chelsea already surpass his 11.43 points earned last season for his club. Diego Costa is on pace to score 29 goals and earn 30 points for his side this season. Let’s see if he can keep up this torrid pace. 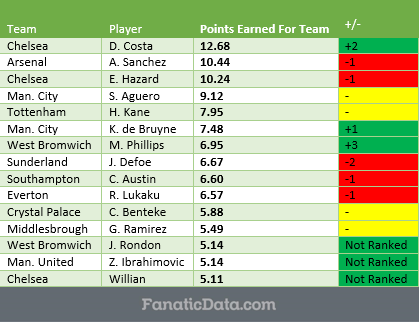 What has made this MVOP ranking race particularly intriguing has been the competition at the top. The player in first place has changed for an 8th straight ranking, and no one should be surprised if it changes again by the time we release the next MVOP ranking after Matchday 18.

Both Sánchez and Eden Hazard continue to earn points for their sides to keep pace with Costa. We can’t ignore Kun Agüero in 4th place, who has been the Premier League’s most prolific scorer since his entrance to the division. 5th place Harry Kane had a remarkable 2nd half surge last season. There is no reason why he can’t repeat that performance this season.

There is also Zlatan Ibrahimović lurking at the bottom of the ranking. He made a reappearance into the MVOP ranking for the first time since Matchday 2. His performance over the last few matchdays suggests that he is here to stay. In short, there is plenty of excitement in store as we slowly round out the first half of the EPL season.

Utilizing the most commonly used formation in the Premier League, 4-2-3-1, we determined the Most Valuable Starting Squad through Matchday 16 (excluding goalies). 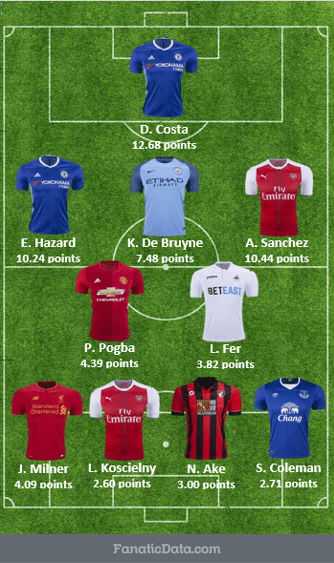 Remarkably, there was only one change to the previous Most Valuable Starting Squad. Paul Pogba replaced Étienne Capoue as one of the two highest point earning central-midfielders in the EPL this season.

Continue following us to see the latest rankings and starting squad after Matchday 18.