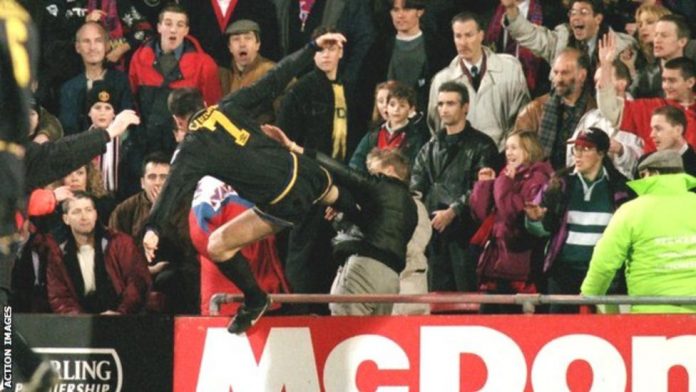 The Premier League is the gift that keeps on giving. Week in week out, you are guaranteed at least one ‘what was he thinking?’ moment. Here are 8 of the most bizarre Premier League moments.

This list would not be complete without an Eric Cantona anecdote. In 1995 Manchester United travelled to Crystal Palace. Two points adrift, a win at Selhurst Park would return United to the top of the league.

The game finished in a one-all draw. However, the result did not reflect the events of the match. In the 48th minute, notorious French forward Eric Cantona was shown red after kicking out at Palace centre-back, Richard Shaw. As Cantona exited the pitch he came across an opposing fan who is said to have shouted abuse in response to the challenge. How did Cantona respond?With a two-footed kung fu kick! Classic Eric.

Former West Brom striker Peter Odemwingie made the trek from the West Midlands all the way to London on transfer deadline day. Odemwingie was heavily linked with a move to Harry Redknapp’s side QPR, but neglected to check the stage of the transfer before departing. Transfer deadline day usually reports more failed transfers than successful ones, which Odemwingie didn’t seem to heed. So imagine driving 120 miles, signing autographs outside the ground, waiting to be announced, only to find out the deal has fallen through. A bashful Odemwingie had to return to the Albion.

In 2014, Newcastle played Hull City at the KC Stadium. The match ended in a 4-1 win for Newcastle. Before the final whistle was blown, in a bizarre twist of events, Newcastle manager Alan Pardew headbutted Hull midfielder David Meyler when he went to collect the ball from the touchline. Pardew left Newcastle later that season.

Marriner sends off the wrong man

The 2014 season saw Chelsea thump Arsenal 6-0 and, to add insult to injury, they were given a red card for a handball by Alex Oxlade-Chamberlain. However, Oxlade-Chamberlain did not receive a red card in a case of mistaken identity, Andre Marriner instead sent Kieran Gibbs for an early shower. Marriner and the FA received a barrage of criticism, whichresulted in Andre Marriner apologising publically for his error.

In 2009, Sunderland beat Liverpool one-nil, with the help of their twelfth man, a stray beachball. A Liverpool fan’s inflatable aided a Darren Bent strike to beat keeper Pepe Reina. The large beach ball deflected the ball making it difficult for Reina to judge where the balls aerial path. The goal stood regardless of its bizarre origins; it did cause a lot of outrage for quite a while!

Remember back in primary school, and there was usually a kid that would bite? Well, fast forward a few years, and he could be notorious striker Luis Suarez. In 2013 Suarez was banned for sinking his teeth into Chelsea defender Branislav Ivanovic. The match ended 2-2, with Suarez scoring a late equaliser. He was not sent off for the offence but received a retrospective 10-game ban. This wasn’t his first biting offence either. Prior to the incident he bit an opposing player on the shoulder while at Ajax, and after this, he then went on and attempted to bite Italian Captain Giorgio Chiellini in the 2014 World Cup.

If you’ve ever wondered what the scariest image you could imagine would be, then look no further than a naked Tony Pulis attacking you head-on. You may think this is a fictitious image, but in 2009, it was a reality for Stoke striker James Beattie. Beattie was said to have raised frustration with manager Pulis over the cancellation of the team’s Christmas party over poor team performance. Pulis, covered only by a towel, is said to have not reacted ‘well’ to Beattie’s comments, resulting in Pulis headbutting Beattie. Somewhere during the scrap, the towel disappeared, and the fight continued – the stuff of nightmares!

Sam Allardyce is known for, well, just being ‘Big Sam’. In 2013 Allardyce was the manager at West Ham and, during a rather dull 0-0 match against South Wales side Swansea City, Sam entered hysterics. There was a glimpse of excitement, however, when Swansea’s centre-back fell to the floor after a collision with Carlton Cole. Spaniard Chico Flores fell to the floor in an exaggerated fashion, unfolding right in front of Allardyce’s touchline box. Allardyce was seen animatedly laughing at the defender’s soft approach. The clip became a viral hit across social media.

This list was curated by professional line marking company Bowcom. To find out more about Bowcom products head to the website by clicking the link.