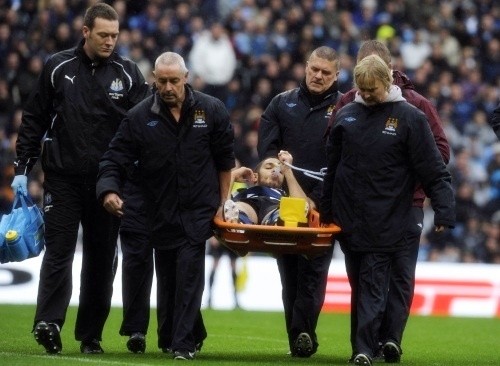 Who can forget the imprudent challenge on former Arsenal striker Eduardo by former Birmingham City player Martin Taylor? Who saw the foolhardy challenge on Aaron Ramsey by Stoke City’s Ryan Shawcross? Does anyone remember the harebrained challenge made by Standard Liege’s Axel Witsel on Anderlecht’s Marcin Wasilewski? What about the asinine challenge of former Manchester City defender Ben Thatcher on former Portsmouth player Pedro Mendes?

All of those incidents are lurid examples of the game in its darkest hour. Now, given the two horrendous challenges we witnessed over the weekend – Wolverhampton’s Henry on Wigan’s Gomez and Manchester City’s De Jong on Newcastle’s Ben Arfa – I just can’t help but feel that this perilous trend is once again raising its ugly head, threatening to suck the sheer jubilance out of the beautiful game.

The pressure to win is ever present and is weighty to bear. 3 points can mean either promotion, Champions League football or a priceless escape from the relegation trap-door. Such pressure can cloud a player’s judgment on the pitch and if there’s a lack of self-control, the end result can be catastrophic as has proven to be the case with the aforementioned examples. That’s no excuse, rather, an explanation.

Some players though, for some reason, have a barbarous tendency to want to “leave their mark” on an opposing player when challenging for the ball and as we saw most recently over the weekend, the outcome was anything but pleasant. Hatem Ben Arfa is facing months of rehabilitation as a result of Nigel De Jong’s over-zealous challenge.

At least though, he can make a comeback. Other players however, have to think along a different line of thought. Why? Because in some cases, the injuries sustained were serious enough to prematurely end their careers. Even if some can play again, as in the case of Eduardo for example, they never look like the same player they were before.

Whether that’s the case with Ben Arfa when he returns, only time will tell. Common among players in this situation is that the psychological effects prove to be a difficult barrier to overcome as they try to get on with their career. Sometimes, that barrier proves to be insurmountable.

Being axed from the squad (at club or International level) for a game, getting a yellow card or a red card, being fined or even missing eight games does not even begin to compare to the kind of ordeal faced by the injured players. Unintentionally injuring a player, as was the case with Rangers’ Broadfoot on Manchester United’s Valencia is one thing, but a clear and stern message needs to be sent to players who insist on “leaving their mark” on their opposite numbers.

I think that the relevant football authorities should develop a punishment that would reflect the seriousness of both the act and the damage caused. It should be a punishment so austere, that players would think carefully before they decide to intentionally harm their colleague. It’s time for victimized players to be protected and avenged along with the sanctity of the beautiful game.