Liverpool earned back-to-back victories in the Premier League after defeating Leicester City 3-1 at the King Power Stadium on Tuesday night.

The victory took Liverpool in eight place in the league, same points with Arsenal, who will face high-flying Southampton on Wednesday night, and five points behind fourth-placed Manchester United.

After enduring a difficult start to the season, it seems like manager Brendan Rodgers has finally got back to his basics. He has rotated his squad well, has utilised Steven Gerrard properly, and most importantly has motivated the team well to grind out results.

Gerrard has been over-used this season (along with Raheem Sterling, who badly needs a rest) but with Lucas Leiva finally showing some good form, Rodgers maintains that keeping his skipper fit and fresh is key for Liverpool to enjoy a good campaign.

Rodgers on Gerrard: “He’s not 24 any more. It’s about mapping out the rest of his career.” So poss rested at w/e to keep fresh v Basel #lfc — Henry Winter (@henrywinter) December 2, 2014

“If I can manage his training and games he can still have real impact for this team,” said Rodgers after the match.

“Even though he is approaching 35 at the end of this year he still has fantastic qualities but like every other player, no matter how good they are, the wheels are out and they are ready to land – but he is not ready to land yet. 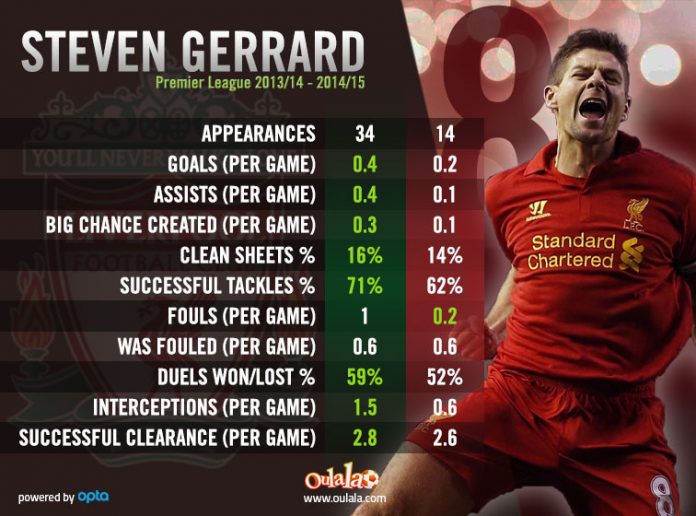 “At this stage of his career it is about the level of the game and he is a very important player for us.”

“He is not 24 any more. You have to do that (manage workloads) with players at this part of their career so it is about mapping out the rest of the season for him.

“I think you saw the energy in his legs tonight and his influence in the game, especially as it wore on. It was an outstanding performance from Steven and an excellent goal.”

Strike problem still remains the thorny issue though, with Liverpool failing to reproduce the free goal scoring form of last season. And with the Reds missing the services of Daniel Sturridge and Mario Balotelli, the onerous task of goal scoring has fallen on the shoulders of 32-year-old striker Rickie Lambert.

Liverpool are still bereft of their fluid, attractive football that earned them plaudits last season, with the Rodgers struggling to ensemble all of the new signings into a cohesive unit. But as James Pearce of The Liverpool Echo said, the signs are evident that Liverpool are slowly getting back to their old best.

The Anfield giants can draw solace from the fact that despite being defeated in six league games so far, they are still around touching distance for the top-four spot. A victory against Manchester United in mid December (provided both team win all their other matches up to that point) would see the Reds close gap with their arch-rivals to only two points – certainly enough to galvanise the squad for a strong top four challenge.

And with games coming thick and fast (Liverpool will play eight games in December) in the busy festive period, Liverpool need to carry the momentum from here on.

It may sound cliche, but it comes with certain degree of warning and trepidation as well. Last time, and the only time, Liverpool managed back to back victories this season, they followed up with only win in next eight games, losing four at a stretch.

Similar sort of result would be catastrophe this time around; another wretched run of form would not only take them further away from the top four spot, the future of Brendan Rodgers would come under scrutiny again resulting into instability at the club.

Also, Liverpool will have to deal with some tough and season defining fixtures (so early) throughout this month which will test the squad’s true character and depth.

Liverpool will play four games at home this month. Out of which, Champions League tie with Basle is a must-win game; the result of that match (both ways) can have a long lasting consequence on this team. This is followed by another potential top-four battle with Arsenal, while Swansea (last game of December) have done well against Liverpool in the past.

In between, Liverpool will travel to Old Trafford to face the red-hot Manchester United, away to Bournemouth in the Capital One Cup tie, and finally at Turf Moor to face struggling Burnley on the Boxing Day. And from our past experience we know, Boxing Day fixtures tend to produce shock results for the big teams.

The way the season has unfolded, results against the immediate rivals could prove to be the turning point going into the New Year. Therefore, positive results against Manchester United and Arsenal will not only take Liverpool closer to top four, but will give a huge psychological boost as well, which they can carry forward to build a strong campaign once their main strikers return.