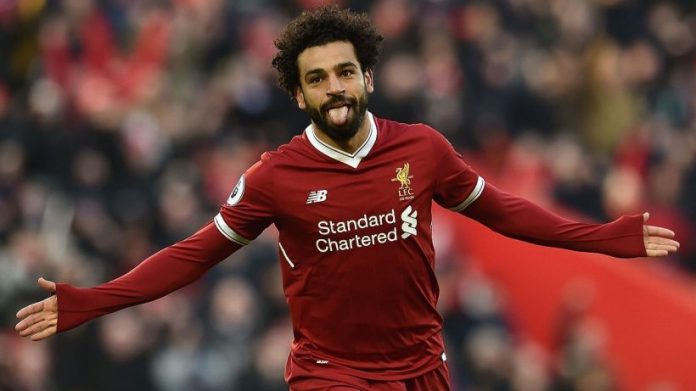 It’s a three-headed horse race at the top of the Premier League’s Most Valuable Offensive Player (MVOP) rankings. Tottenham’s Harry Kane and Manchester United’s Romelu Lukaku sit in the top 3 as the usual suspects. But it’s Liverpool’s Mohamed Salah that is turning heads.

As the breakout star of the EPL this season, Salah has been talked about frequently all season long. He started out strong by scoring in his first league match for Liverpool and has continued his strong performance throughout the season.

In fact, over the last 4 matchdays, Mohamed Salah is currently the hottest performer in the league. We took that into account when predicting what the MVOP total will be at season’s end for all players ranked below. 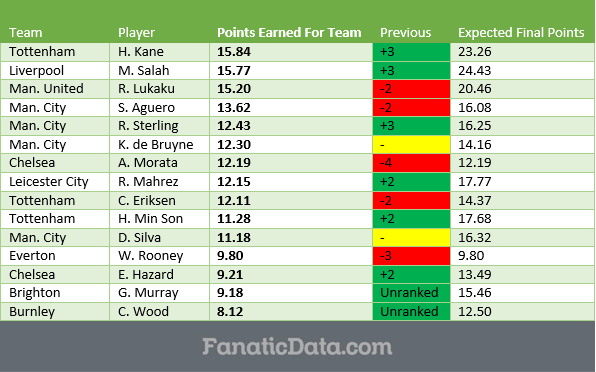 At this current pace, we can expect Salah to surpass Kane by season’s end to become the MVOP of the Premier League. In the process, our final predicted total of 24.43 for Salah would set an EPL record for most points in a season. Truly an amazing accomplishment for the 25-year-old Egyptian star. 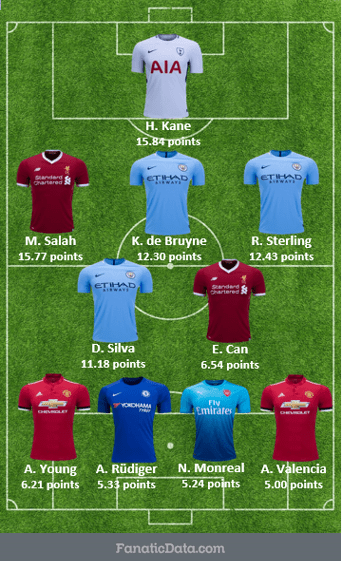 30 Matchdays in and the most popular starting formation in the Premier League continues to be 4-2-3-1. Using this formation, we have determined the most valuable starting squad in the EPL (excluding goalies).

Manchester City’s dominance in the EPL this season is showing up in the most valuable starting squad as well. In fact, Man. City player David Silva’s recent offensive support in the team’s victories has already seen him earn more points than any other EPL central-midfielder last season.

Starting next to Silva is Mohamed Salah’s teammate Emre Can. It is the first time he has ever found himself in this squad. The only other new entrants this week are Silva’s teammate Raheem Sterling, who was previously on the squad after Matchday 22, and reigning MVOP champion Kane, who is a first-time entrant this season.

Get an update for the rankings and starting squad after Matchday 34!