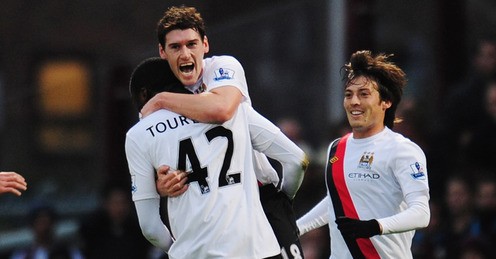 I can hear the outcry even now – naturally three defensive midfielders can be seen as very, very negative, if you choose to go along with the popular designation of these players as defensive midfielders. That is, players who exist largely to break up the play, players who work to disrupt the opposition – tools of the reactive manager. That is to say, negative players. Or perhaps not. 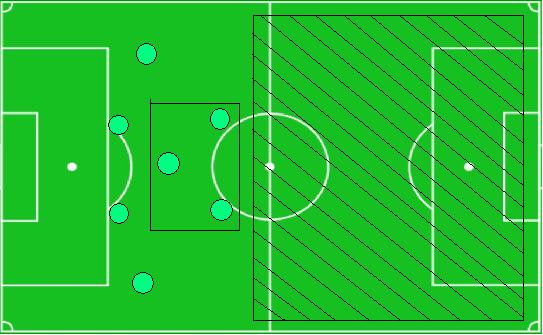 Here’s a diagram of how Man City’s midfield might be considered. Defensive midfielders are generally tasked to patrol the gap in front of the defence, thus allowing the opposition to attack for a elongated expanse of time. By maintaining position, the defensive midfielders can then snuff out threat and/or be in the right place to quickly help out a fullback, in case of the opposing fullback coming forward in an attempt to overload. The defensive midfielder is in effect a ‘come and get me’ player, one who snuffs out the threat as it builds momentum.

Of course, that yawning gap on the diagram is a demonstration of the space that the Sky Blue’s side may have to gain in order to put the opposition under pressure. Your Balotelli-Tevez-Silva striking force (or whichever combination is preferred) has to make up forty to fifty meters of ground just to get into chance fashioning territory (closer to fifty in the City of Manchester Stadium).

So, the midfield three of De Jong, Barry and Toure is deeply, irreparably flawed. Or not.

In fact, I could argue that they are in fact potentially one of the best midfields in world football, if they are utilized effectively. In the manner of Barcelona for example. One of the most aggressively pressing teams in world football, a team who relentlessly batter opponents into their own box until they submit. Imagine that Man City were to try the same. 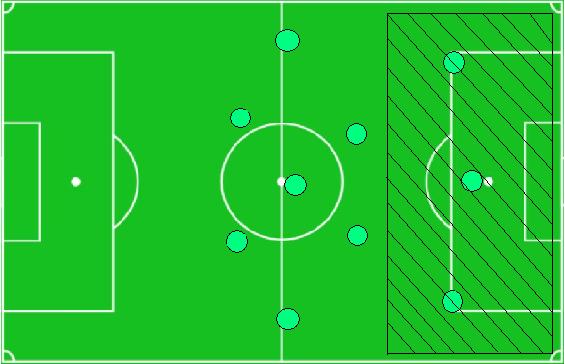 Big attacking difference. Less space for the opposition, less room that Man City need to close down with those battling, ball winning midfielders. And of course you are pressing into the opposition half. Immediately the strikers can find themselves in much more dangerous positions and with the likes of pit-bull terrier Tevez leading the line, Man City have the tools to put the opposition under unbelievable pressure off the ball. Suddenly these defensive destroyers are Exocet missile-esque, able to hunt down and crush the opposition and constantly disrupt any play the opposition try to put together.

This is half of the devastating machine that is Barcelona, and Man City can replicate it. Of course, Barry, Yaya and De Jong are no Iniesta, Xavi and Busquets in the passing or skill department. But what they can do is anticipate and win the ball quickly, giving the opposition no room to function. And while Yaya and Barry are not on the same attacking and creative level of Xavi and Iniesta, they can provide goals – Yaya Toure  has four goals and two assists this season. Gareth Barry has a further two goals and two assists, demonstrating that both are capable further up the field. There is a creative edge in the two, despite the labelling of all three of the central midfielders as destroyers.

What Man City’s midfield has is versatility – Mancini can ask the team to sit back if he wants them to, and they can also box the opposition in and take a real stranglehold on the game with tactics that are very, very hard to counter. Far from being a ‘must not lose’ midfield, Manchester City’s centre has the potential to be a key to Manchester City. The potential to be a title winning juggernaut.

Of course a problem can be mentality – the desire of such players to drop more toward their own goal. And then there is Barcelona’s problem – they can be caught out when they press aggressively, as I gave an attempt at explaining in my previous article. But what Man City’s midfield have that Barcelona’s don’t is the extra steel – that is if fired up, the desire and determination, the destroying ability to rob the opposition of attacking opportunity. Something which if done properly can make these ‘defensive, negative’ midfielders very offensively potent indeed.

Enjoyed this? Enjoy previous works such as one on free kick taking geniuses, peruse previous tactical ravings on fullbacks and corners, and of course my ragtag blog.