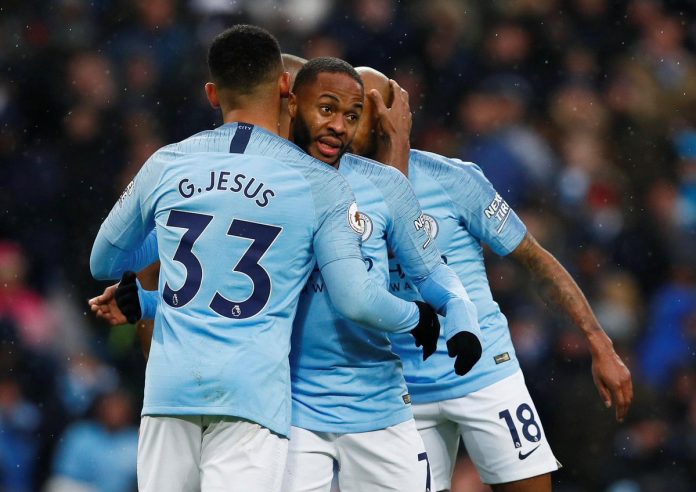 Manchester City returned to the top of the Premier League table after winning 3-1 against Everton at the Etihad Stadium on Saturday.

Gabriel Jesus scored twice while substitute Raheem Sterling added another to earn all three points for Pep Guardiola’s side. Dominic Calvert Lewin scored one for the visitors.

City totally dominating without getting out of 2 gear. EFC has a great chance with Richarlison blazing over – besides that EFC have been very poor in possession all over the pitch.

Amazes me the levels of Pep going of his nut while his team strolling around the pitch effortlessly.

EFC has great chances to score but lacked belief & concentration at crucial times.

Probably City’s weakest starting X11 this season – can u say that! ?

Still million miles ahead of anyone! Just think people used to laugh at City. ??‍♂️

Same old problems for EFC – Soft goals & for how many season we are just going to let crosses come into the box? ? #Schoolboy

Ball noted that Everton were poor in possession during the game. He also criticised Everton’s inability to stop conceding soft goals at crucial time.

The football pundit showered praise on Manchester City boss Pep Guardiola, saying that his willingness to achieve perfection ‘amazes’ him.

Ball was absolutely spot on. Everton managed a meagre 33% of possession during the game, and managed only two shots on target.

Furthermore, the likes of Yerry Mina and Seamus Coleman had a poor game in defence, while the midfield failed to stay compact.

Man City have won their last 10 Premier League home games, scoring 36 goals, so Ball is nearly correct in his observation that the champions are way ahead of others.