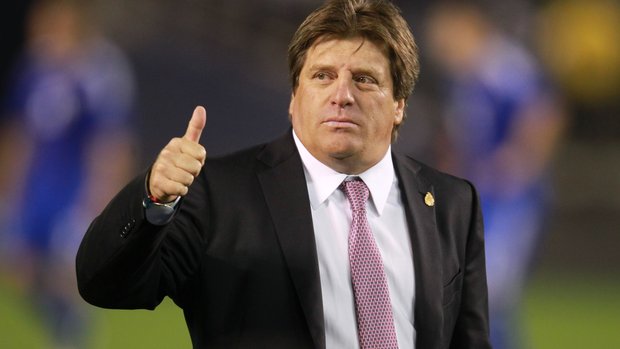 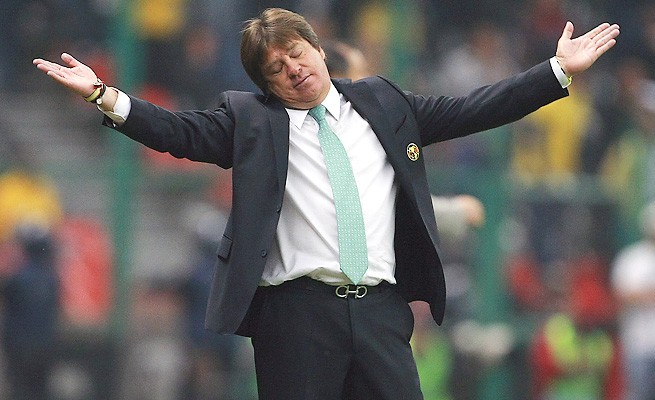 I know the storyline: Miguel Herrera is supposed to be the savior of El Tri.

And in a way, I see it. I see a little Diego Maradona in the brash, 46 year-old from Hidalgo.

Herrera has an inch on Maradona. But they both are as easily controversial as they are charming. They both jump around on the touchline in wild goal celebrations that make Andre Villas-Boas’ contortions look sane.

They are loved by the media and general public which they represent, and yet you just know that it all might go up in flames at any moment.

Herrera is more accomplished than Maradona as a manager, and he has nowhere near the stardom, but there are striking similarities in their personalities.

For all his well-documented foibles, Maradona didn’t exactly fail at the World Cup in 2010. His Argentina team romped through their first four games with a goal differential of +8 before running into a terrific Germany side in the quarterfinal.

Obviously, that type of performance would be just fine for Mexico this summer.

After the constant and crushing gloom of an astoundingly mis-managed and poor qualification campaign in which Mexico stuck with an overmatched coach for a year too long, then ripped through three different replacements for him in a month, the heavens are finally smiling on El Tri.

As if Raul Jimenez’s bicycle kick against and the USA B team’s stoppage time salvo in Panama weren’t enough, Mexico got a feathery landing in the World Cup draw.

Look past Brazil – it’s Croatia and Cameroon that Mexico are vying with for a place in the knockout round.

So it’s fair to say that despite all the mayhem, confidence is slowly returning, in large part because Herrera is in charge.

But is the man who has turned around Mexico good – or just lucky?

One look at how Herrera landed and secured the Mexico job raises red flags.

After Chepo de la Torre was finally sacked following Mexico’s 2-1 home defeat to Honduras, Luis Fernandez Tena was put in charge for the qualifier against the United States in Columbus.

It was an impossible situation for Tena. The US was winning that game Dos a Cero no matter who was in charge.

So that was the end of Tena. The next man up was Victor Manuel Vucetich, who faced games against Panama and Costa Rica with the sole objective to qualify in fourth position and make an inter-continental playoff.

Vucetich somehow dragged himself over the line. With incredible luck (and US charity), Mexico did finish in fourth. It didn’t matter. Vucetich was sacked anyway.

El Tri was running out of options. Herrera was the only plausible choice to take charge of the playoff against New Zealand, because no established manager wanted to come in to take charge of a team in shambles in a shotgun series with only months to prepare for the World Cup.

That’s why Herrera at first took the job on an interim basis, and combined it with his duties at Club America. This was no longterm engagement.

Mexico’s original idea was to let Herrera take the team through the playoff and World Cup – if they made it – and then hire an experienced coach like Marcelo Bielsa to embark on a thorough rebuilding process.

But Herrera won the job. Why? He got two games against New Zealand. All due respect to Herrera, who rallied a heavily beleaguered side, Tena had to battle the United States and Vucetich auditioned against Panama and Costa Rica.

Herrera’s masterstroke was selecting a team based only of domestically-based players – leaving out players like Giovani Dos Santos and Javier Hernandez – which seems really gusty until you remember that New Zealand also selected a squad of domestic players from New Zealand.

Another Herrera move was bucking up the role of reinstated captain Rafael Marquez, who is even older, slower, and grouchier than when we last saw him in 2010.

Of course, the playoff went well – Mexico won 9-3 on aggregate – and there was enough goodwill for Herrera to give him the full-time job.

But what has really changed with Mexico? Herrera released El Tri’s World Cup squad on Friday, and there was nothing radical about it. The European players were reinstated, and the team very much resembles that that was drawing Jamaica 0-0 at the Azteca in World Cup qualifying.

Mexico’s defense is old, the midfield simply lacks talent, and while there are plenty of good options up top, none are the misfiring Hernandez, who is a hero in Mexico.

This is still a very hard job, and the return of expectation may not be the best thing for Mexico in view to the fast approaching World Cup.

Herrera hasn’t really proved anything yet. He brushed aside New Zealand, but I think his two predecessors could have done the same if they were given the chance.

In all honesty, Mexico should easily advance from Group A this summer. Croatia is a talented team, but they have a rookie head coach, suspensions galore, and a general lack of solidarity, cohesion, and discipline.

Cameroon are a very mediocre side – maybe the worst African team in the tournament. In years past, Mexico would have eaten this kind of competition up. Now, you don’t really know what to expect.

I’m not betting on Herrera – not yet anyway. I think Herrera has great personality and may just work out very well, but not on the basis of anything he’s done so far as Mexico manager. On the other hand, Herrera’s still the guy who has been sacked at four of the five clubs he managed before Club America and Mexico.

So far with national team, Herrera has been lucky. He’ll have to be good if Mexico want to play more than three games in Brazil.