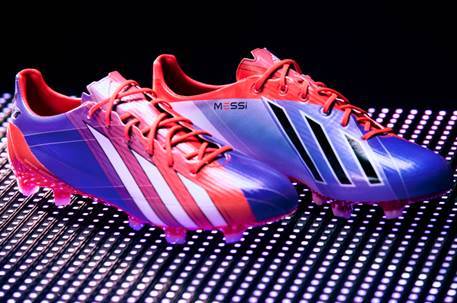 Adidas have announced the launch of adizero F50 football boots for Lionel Messi. The German manufacturers believe that the new boots will escalate the performances of the Barcelona genius to a whole new level. The new version of Messi’s F50 boots are visually appealing just like his football with bright TURBO / BLAST PURPLE / WHITE patches aiming to light up the pitch he graces.

The newly designed spikes are specifically designed to replicate the cutting edge that separates Messi on the pitch from the rest of the players, when he is plying his trade at a hundred miles per hour. The new sets of boots were on display on the 29th of June during the ‘Messi and Friends’ tour match.

The unique selections of colours are meant to stand out distinctly on the pitch, much like the man himself.

The revolutionary technology and supreme engineering behind the adizero F50 ensures that the wearer is equipped with enhanced acceleration and top speed on the pitch, while with a weight of 165g, adizero F50 remains one of the lightest shoes in the world.

The man who is supposed to be wearing the pair of boots is famous for scoring endless number of goals and ghosting past players almost at will. Adidas’ specially designed product guarantees even more precision and sharpness to the game of the best player of his generation.

Along with the launch, Adidas have ensured that there are certain experiences and events to engage in, for the fans. Social media interactions and giveaways have been organised to get the fans closer to the player they idolise.

Fans will also be granted a ‘once in a lifetime’ opportunity to get up close and personal with the player during the launch of his exclusive range.

Adidas also maintain that the fans will have a lot to look forward to, and that announcements will be made at the right time regarding their involvements in these events in the near future.