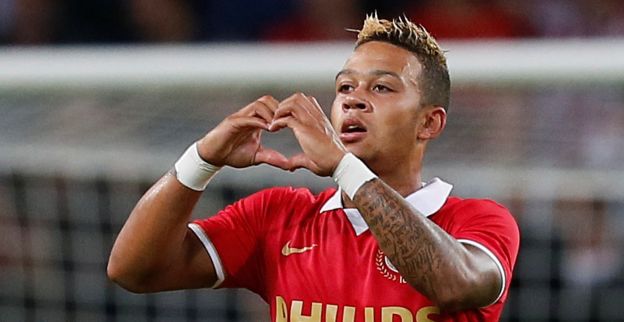 Dutch winger Memphis Depay has expressed his happiness after almost-sealing-a-move to Manchester United in the summer.

The 21-year-old hailed Manchester United as a great club and revealed that he used to support the club since he was only 11. He said positive words about the fans, his ambitions to win silverware with United and paid gratitude to Louis van Gaal for the influence the Dutchman has had in his short career.

Depay said that he was close to joining PSG, but a private meeting held with Van Gaal changed everything. As if he was waiting for the green signal and didn’t hesitate to say ‘yes’ once the offer being made.

Last week, PSV reached an agreement with Manchester United, thought to be in the region of £30m, but the deal is yet to be completed, pending medical and other formalities.

Dutch newpaper De Telegraph suggest that Depay is all set to travel to Manchester United this week to complete his medical.

Depay scored against Heracles on Sunday to take his goal tally to 22. However, he probably won’t be playing the final game for PSV against ADO, as the club want him to finalise the transfer at the earliest. He said: “If it were up to me, I play that game too.”

As it stands, Depay will fly to Manchester this week to complete his medical and the deal will be finalised thereafter. The highly talented youngster will become the fourth player to have joined United from PSV. His predecessors – Van Nistelrooy, Stam and Ji Sung have all etched their name as cult heroes at the club – Depay would be hoping to emulate them at this iconic club in coming years.