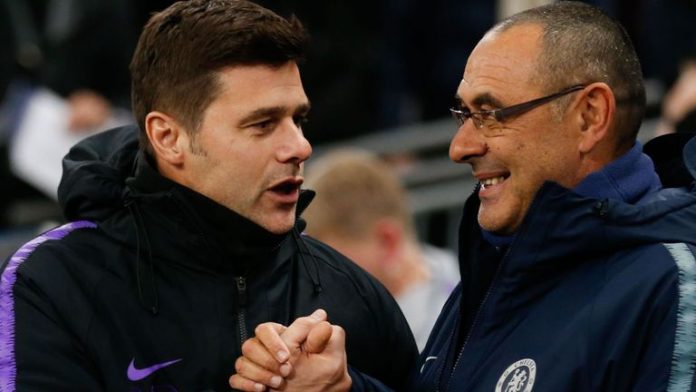 Chelsea manager Maurizio Sarri has revealed that Tottenham are now in the top four race.

The Italian has outlined the harsh reality that Mauricio Pochettino’s side will now fight for a place in the Champions League next season.

He said to Guardian: “We were trying to involve Tottenham in the fight and I think that now they are involved. So, better two teams for four places than three for one place.”

The Londoners were in the title race not so long ago but the results against Burnley, Chelsea and Arsenal have damaged their title aspirations.

The likes of Manchester United, Chelsea and Arsenal are breathing down Tottenham’s necks right now and Pochettino will have to get his side back on track.

They cannot afford any more slip-ups between now and the end of the season or it could jeopardize their chances of playing in the Champions League.

Spurs are still in the Champions League this season and they are expected to make it to the quarter finals of the competition. It will be interesting to see how they balance two competitions with a small squad now.

Tottenham and Mauricio Pochettino are surely looking at a tough few weeks now.