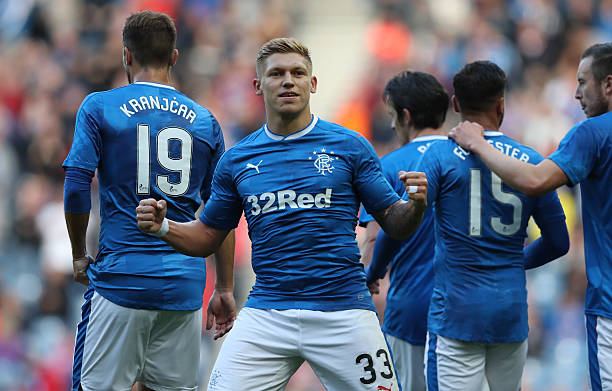 Rangers booked their place in the group stages of the Europa League following a pulsating 1-0 win against Legia Warsaw at Ibrox last night.

The Poles held the Light Blues to a goalless draw last Thursday in the first-leg, and the return leg was minutes from going into extra time.

However, Alfredo Morelos connected with a fine Jordan Jones’ cross to head in a 91st-minute winner and send Ibrox into euphoria.

The Colombian had earlier missed a couple of chances to put Rangers ahead, while the visitors also had their chances, but Allan McGregor was on hand to keep them at bay.

The hosts weren’t particularly impressive and will need to do better going forward in front of goal if they are to go far in the continental competition.

Former Rangers forward Martyn Waghorn was keeping an eye on the encounter, and here is how he reacted to Morelos’ goal on Twitter:

The Gers will know their fate when the draws take place later in the day, and they will hope to make it beyond the group stages after failing to do so last term.

Manager Steven Gerrard and his players can draw from last season’s experience this term, and it will be interesting to see how they fare in the Europa League this time out.