And so, after a year-long absence from a soccer stadium (the last live match I watched was Chile vs. Nigeria, FIFA U-20 World Cup Quarter-Finals, and only because the tournament took place in Canada), I courageously donned my “soccer fanatic” shirt and went to see Paris Saint Germain vs. Bordeaux Saturday, Day 2 of the French Ligue 1 2008-09 season.

Actually I lied: I was wearing a Montreal Canadians t-shirt which, amidst the dozens of PSG fans, invariably (and appropriately) tagged me as a “fish out of water.” Little did they know that beneath the shirt, a brilliant analytical soccer mind was there to scrutinize, analyse, and report to you on the state of Ligue 1 football….

So right from the get-go, let’s get it out of the way: based what I saw on Saturday, what is the state of French Ligue 1 football? Bad. Boooooring. Soporific. In fact, after the first 45 minutes of play, I became progressively terrorized with a thought. The very same which had been plaguing my mind ever since I purchased my â‚¬85 ticket (all the cheaper tickets were sold out… for me this was a justifiable expense, since I watch about… I don’t know… ONE live football match every year?): like too many times in the past years in France, this game could end with a 0-0 draw. The horror! The horror!

Fortunately, last year’s Ligue 2 topscorer and new PSG recruit Guillaume Hoarau made my day. His 53rd minute match opener transformed what until then had been a dry, insipid, sorry excuse for a kick-around, into a vibrant and offensive game of footy. Indeed galvanized by their goal, PSG were now turning on the style with fast one-touch plays, while Bordeaux were now forced to push forward in order to equalize. Mind you, I’m not saying this suddenly turned into a match between Brazil and Argentina, but it did actually become interesting to watch. Besides, since I was cheering for Paris (when in Rome…) I was happy they had finally scored. 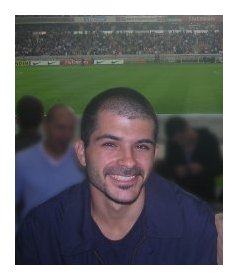 Nevertheless, as much as I was glad the club achieved a good win (against a Champions League team mind you), it’s sad to notice there is still an abyss between the level of play of Ligue 1 and say… Serie A. I remember watching the French first division back in the day (when I was still living in France), and damnit! I did get excited over the matches!!!! Yet for some reason during the past few years, Ligue 1 became a boring haven for 0-0 scorelines!! How did that happen, I ask!?

Anyways, aside from what we saw on the field, the stadium atmosphere was truly amazing. The supporters chanting, the color of the flares (the smoke, a bit less), the “home crowd” effect were all a wonderful experience, and actually made me wish I could see more live games in the future. Unfortunately, that’s a bit hard in Canada, as I’m not fully ready to go watch the Montreal Impact just yet (it’s painful enough to watch them on TV… ).

With that said, allow me to shout a quick “Pariiiiiis est magique“, and leave you to L’Ã‰quipe‘s full match report below. Thanks also to my buddies Renaud and Louis for taking the time (and the money… â‚¬85… what a folly) to accompany me. As you can tell in the picture below, Louis (far left) was evidently very excited about the match.

(From L’Ã‰quipe): New season, new habits. Paris St. Germain launched their home campaign on Saturday evening, and did so in the best of ways by beating Bordeaux (runners-up behind Lyon last year, and once again a Ligue 1 title favorite) with a score of 1-0 at Parc des Princes. The very same stadium in which PSG could only muster 4 wins during 2007-08, was witness to a cynical performance by Paul Le Guen’s team, in particular that of ex-Le Havre striker Guillaume Hoarau who transformed into goal the only real chance that landed in his vicinity. Indeed, last year’s Ligue 2 topscorer was the main reference point for the Parisians, a constant target man in aerial plays as well as passes on the ground, and proved to be essential for PSG’s thrust to victory.

It was really too bad for Bordeaux, because at the time they conceded the goal (minute 53) the Girondins had dominated (and continued to dominate) most of the game. Despite a lot of ball possession however, it took the away team as much as 30 minutes before striking their first shot on target, a Fernando Menegazzo blast that tested the reflexes of MickaÃ«l Landreau. It was, in effect, the only real chance of the half also because of the lack of initiative demonstrated by both teams. Ex-Caen striker Yoan Gouffran could not provide much to the attacking cause (partly because, due to his cancelled transfer to the Paris club this Summer, he was constantly booed by the home crowd whenever he touched the ball), while on-loan AC Milan midfielder Yoann Gourcuff appeared much less inspired than the previous week.

As for Paris SG, the home team was way to timid in the first half and this despite the presence of playmakers like Jérome Rothen, Stéphane Sessegnon and a certain Ludovic Giuly (fresh from his transfer from AS Roma). As for newly-appointed captain Claude Makelele, his defensive work was productive… his passing a bit less. With the ex-Chelsea midfielder lacking the support of Jérémy Clément (left on the bench in favor of Clément ChantÃ´me), PSG were severely deficient in creativity and the only first half chances they could muster were a mid-range Giuly volley (deflected by the Bordeaux defense) and shot by Sessegnon miles over the bar.

After the break however, Paris only needed 8 minutes to take the lead. Recovering the ball on the edge of the Bordeaux box, Rothen’s good pressuring work permitted him to deliver a pinpoint pass for Guillame Hoarau, and the Ligue 2 topscorer had no trouble in beating Ramé with a left-footed instep. 1-0 Paris SG.

The match opener was a welcome novelty for the Parc des Princes crowd, who could now enjoy bits of open, attacking football. Indeed taking the lead had “woken up” the Parisians, who were now executing well-calibrated passes and exploiting the vivacity of Sessegnon and Giuly in the offensive zone. Bordeaux were now forced to take risks in order to equalize, but while maintaining much of the ball possession (especially in the final 15 minutes) Laurent Blanc’s team lacked the precision necessary to put the ball in the net: Landreau was quite attentive on shots by Wendel (59th minute free-kick) and Cavenaghi (70th minute one-on-one), thus allowing his team to retain the lead until the full-time whistle.

It will probably be a long one, but PSG’s home season started well this year…