Long term Manchester United target Wesley Sneijder has dropped a major hint that he is open to join the Premier League. Sneijder who won the treble with Jose Mourinho at inter Milan currently plies his trade for Turkish side Galatasaray, with whom he has a contract until the summer of 2016. 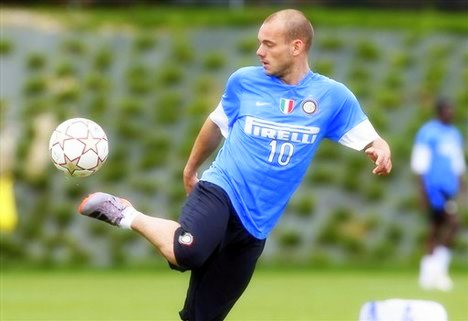 The 30 year old was linked with United in the summer transfer window with Louis Van Gaal now being in charge of the Red Devils. The pair had a superb World Cup campaign reaching the semi finals with the Netherlands where they were effectively beaten by eventual runners up Argentina in the penalty shootout.

However speaking to reporters and enjoying life in Turkey, Sneijder said, “Just talking alone may not be useful but I can not say it is impossible because of a fact, life is always changing.”

“Now I am in Turkey and have many friends. I’m happy as well as the family and the beautiful city of Istanbul.”