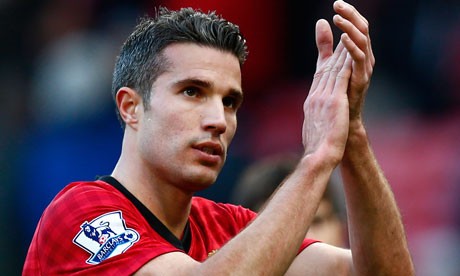 Robin van Persie joined Manchester United from Arsenal in order to win trophies, and trophies only. In his first season at the club, he played a crucial role in helping United win their 20th league title. Since then, it’s been a tough journey for the Dutch striker and the club he plays for.

The sudden fall of the giant was unexpected for the fans; it must have been hard for the players as well who were habituated of winning trophies regularly. Van Persie struggled with injuries last season, as United endured a calamitous campaign under David Moyes; yet he ended up with 18 goals for the Red Devils.

Everybody expected him to regain his old form this season following the appointment of Louis van Gaal, but so far, he has cut a frustrating figure only. If his late goal equaliser against Chelsea at Old Trafford sprouted hope among the fans, that was nipped in the bud quickly after the Manchester derby. The dismissal of Chris Smalling grabbed all the headlines, but Van Persie’s over-all contribution wasn’t up to the mark again.

And when the team manager takes off one of his match winner for a young inexperienced forward, it immediately rings up the alarm bell. Put it simply, Van Persie may struggle to get regular games, once Radamel Falcao is back from injury.

Initial negotiation has started (as per the report) while former Liverpool player Dirk Kuyt could play a pivotal in enticing his fellow compatriot to join him in Turkey.

When United signed Van Persie, the club knew they would never get any handsome fee from further transfer. He is 31 now and very few clubs in the world would be willing to pay a double digit transfer fee for him.

Having said that next summer Van Persie and Manchester United could be in a difficult position, especially if the club fail to qualify for the Champions League. Will United continue to pay exorbitant fee for a player who will have only a year left on his contract? Fenerbahce are also targeting PSV’s highly rated winger Memphis Depay and are willing to pay £15m for his services.